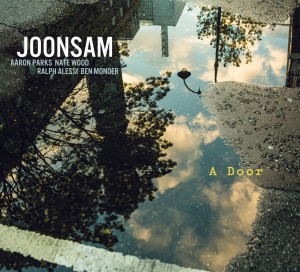 With poise and grace, Joonsam and his ensemble create free-flowing music that will cause you to reflect on your own recent memories, painting pictures that will make your heart full.
DOWNBEAT MAGAZINE

For his debut as a leader, South Korean bassist Joonsam Lee gathered compositions he had written since moving to New York City in 2007 that refected the wide-range of musical situations he's experienced, from concerts with his own trio to symphony performances, international tours, and working the clubs of New York. With a supple trio as the foundation - featuring Aaron Parks on piano and drummer Nate Wood - Joonsam adds the voices of Ralph Alessi on trumpet, guitarist Ben Monder, and various other instruments to fill out inspired arrangements for an engaging and far-flung set of music.

Reviews of A Door

Midwest Review (Chris Spector)
The young, South Korean bass players that's been parked in NYC when not globe trotting or over achieving, takes it downtown for a trio date that wholly original. With augmentation from other well known downtowners, this is typical of the kind of muscular, angular jazz that New York is known for, but in essence, there's nothing typical about it. H ...

JazzTimes (Travis Rogers, Jr.)
It's hard to improve on a trio that features Aaron Parks on piano and Nate Woods on drums but, when bassist Joonsam Lee was ready to release his debut album as a leader, he beefed up an already formidable line-up by adding Ralph Alessi on trumpet, Yvonnick Prene on harmonica, Ben Monder on guitar, and the fascinating additions of Yeahwon Shin on v ...

Downbeat Magazine (Izzy Yellin)
Perfect for a rainy day inside, bandleader and bassist Joonsam's debut album, A Door, is an eclectic offering that documents the musician's past experiences in New York City. A classically trained bassist from Seoul, South Korea, Joonsam has lived in the city for nine years, having played various settings there. On his latest effort, he absorbs and ...

Jazz Weekly (George W. Harris)
Joonsam is a bassist that brings together a wide palate of sounds and colors. The core trio with Aaron Parks/p and Nate Woods/dr are augmented by a rotating team of Ralph Alessi/tp, Ben Monder/g, and a handful of cameos. Wood rocks hard with Monder's guitar on "Zadrak" and the trio rustles to Alessi's horn on "Whirlwind." Reflective and quiet, "Lov ...

Bird is the Worm (Dave Sumner)
There's an unconventional dichotomy of sharp orchestration and quirky eccentricity on this debut from bassist Joonsam Lee. But even in this, it's a little different, as A Door is just as likely to flash some fangs as craft a catchy melody aimed at eliciting a smile and spurring the foot into action. That added dose of the unexpected is a big attr ...