MUSIC REVIEW BY Dave Sumner, Bird is the Worm 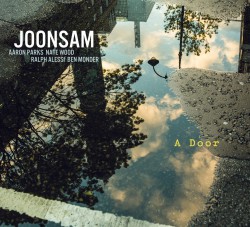 There's an unconventional dichotomy of sharp orchestration and quirky eccentricity on this debut from bassist Joonsam Lee. But even in this, it's a little different, as A Door is just as likely to flash some fangs as craft a catchy melody aimed at eliciting a smile and spurring the foot into action. That added dose of the unexpected is a big attraction for the recording, and it's why the likelihood of developing a minor addiction isn't entirely unexpected.

Opening track "Whirlwind" is a nice example of this, with Ralph Alessi's trumpet voicing a melody that says, hi, come on in, nothing to fear, which, he later contradicts with a ferocious solo that's more about blowing the roof off the joint than it is to get the foot tapping. And then there's the way Ben Monder rips through "Zadrak," which, despite the hi-voltage electricity, has a melody that's gonna get its hooks into anyone caught in its path. Occasionally the guitar electricity subsides, and the way pianist Aaron Parks is able to work in a moody tone while honoring both the melody and the intensity that surrounds his contributions is an any-port-in-the-storm moment that shows this album in its best light.