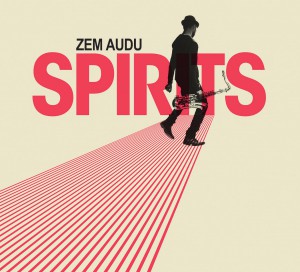 Born in Nigeria, raised in London, and now living in Brooklyn, saxophonist Zem Audu possesses a deep well of influences to draw from for his debut recording. Inviting you to feel the atmosphere of the city streets, the blazing sunshine of the Caribbean, and the soulfulness of Nigerian culture, the visceral impact of his experiences with a wide-range of musical greatness - Jason Moran, Mike Stern, Hugh Masekela, and his international tours with the legendary Skatalites - is wildly evident on SPIRITS. Recorded at Avatar Studios in New York with guitarist Mike Stern, pianist Benito Gonzales, Ben Williams on bass and John Davis on drums, Audu's eleven original compositions crackle with ingenuity, spirit, and GROOVE as they celebrate the life experiences that inspired them.

All Music (Thom Jurek)
Saxophonist and composer Zem Audu is a musical nomad. Though he has been a resident of New York City for years, he was born in Nigeria and raised in England, where he received a formidable musical education. He spent the '90s and 2000s working with a startling array of musicians including Hugh Masekela, Courtney Pine, Ernest Ranglin, Jason Moran, a ...

Something Else (S. Victor Aaron)
Many of the more progressive jazz types these days boast diverse ethnic/world music bonafides that they creatively infuse into their music that broadens the jazz vernacular. Saxophonist Zem Audu ‘s brand of jazz is internationally flavored, too, but he didn't get that way out of mere curiosity; he's lived that kind of life. Born in Nigeria and ...

Revive Music (DanMichael Reeves)
You'll want to familiarize yourself quickly with saxophonist Zem Audu. The New York-based musician was born in Nigeria before his parents quickly relocated his family to England. "The question I always get asked is, ‘Where are you from?' I don't want to neglect that I was born in Nigeria and just say I'm English because of my passport," shares Au ...

KNKX - Seattle (Abe Beeson)
Nigerian-born, London-raised, and now Brooklyn-based saxophonist Zem Audu is quickly becoming one of the most talked about sax players in New York. Self-taught on piano and guitar, he settled on saxophone before heading to the prestigious Trinity College of Music in London. Early work found him playing with ska bands, so popular in the Caribbean ...

Something Else Reviews (S. Victor Aaron)
Many of the more progressive jazz types these days boast diverse ethnic/world music bonafides that they creatively infuse into their music that broadens the jazz vernacular. Saxophonist Zem Audu ‘s brand of jazz is internationally flavored, too, but he didn't get that way out of mere curiosity; he's lived that kind of life. Born in Nigeria and ...

WTJU, Richmond (Dave Rogers)
Nigerian-born, London-raised, tenor sax player Zem Audu presents his own take on funky soul or fusion jazz. Having first explored piano and guitar, Audu eventually settled on sax and studied with Courtney Pine as well as with Jean Toussaint at Trinity College of Music. This is his second release as a leader. He composed all of the songs on the disc ...

Downbeat (Ken Micallef)
Musicians who've had the opportunity to experience American jazz culture enjoy the immersion in history and tradition that is the birthright of every U.S.-born player. But equally appealing is the jazz-rich legacy inherent in London's history of African and Caribbean immigration as well as its long-standing love of and inclusion of pop music forms. ...

Jazz Weekly (George W. Harris)
RINGER OF THE WEEK Tenor saxist and composer Zem Audo puts together a highly exciting and textured album of originals. He boasts of a rich, strong and flavorful tone, delivering rich arias with pianist Benito Gonzales, all star bassist Ben Williams and drummer John Davis on "Bamijo" and caresses the melody with the kinetic team on "Muso." The bri ...