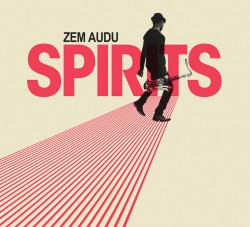 Saxophonist and composer Zem Audu is a musical nomad. Though he has been a resident of New York City for years, he was born in Nigeria and raised in England, where he received a formidable musical education. He spent the '90s and 2000s working with a startling array of musicians including Hugh Masekela, Courtney Pine, Ernest Ranglin, Jason Moran, and the Skatalites (with whom he has enjoyed a lengthy tenure). In 2016, he issued a digital-only EP called Visions on which he played all the instruments. Its seven tracks floated between post-bop and spiritual jazz, reggae, Afro-beat, South African folk styles, and more. In essence, it was a traveler's album. His debut full-length, Spirits, ups the ante on that premise by offering listeners a storyteller's musical journey through the various places he's traveled and the identities he's comprised of. Audu is accompanied here by his working quartet -- pianist Benito Gonzalez, bassist Ben Williams, drummer John Davis, and guest guitarist Mike Stern, who appears on five of the set's 11 tracks.

If one has to label Audu's music, it would fall under the term "contemporary jazz," but it's a limiting umbrella for everything that transpires here. The funky opener "Neon Lights" is saturated in urban jazz grooves -- think Michael Brecker, early Grover Washington, Jr. etc. -- the guitar break by Stern and Audu's solo push it into fusion terrain. In "Big Qi," Audu takes his lyrical sensibilities and applies them to dubwise funk. The saxophonist's infectious melodies nonetheless make room for his rhythm section to dig deep and go. Stern's fleet arpeggios add a post-bop dimension to further the tune's complexities. "Bird" builds the bridge between Capetown jazz and soul with a fine solo by Gonzalez. The muscular "Muso" offers a showcase for the rhythm section, who display a canny ability for interlocking grooves. The title track is a burner drenched in driving Afro-funk, with a knotty rhythmic melody that recalls Fela Kuti. "Dragon," with its breezy, nocturnal groove, is a highlight as Audu and Gonzalez trade scintillating solos that never stray far from the cut. The circular Afro-bop strut in "Arcade" is appended by a killer solo from Williams. "Moths" is a celebratory fusion blowing session with Stern and Audu trading fours before a Nigerian hi-life-esque bridge claims center stage. If there is a quibble with Spirits, it's a small one: The sequencing in the middle section could use a more dynamic palette. That aside, this is a bracing debut by a multi-dimensional talent. Audu's compositions sparkle with harmonic invention and rhythmic creativity. He never solos for too long, preferring instead to let his ensemble reveal the story he's telling. Jazz is currently undergoing a creative renaissance with a plethora of new talents stretching the music in all directions. Audu, with his nomadic experiential, and expansive musical world view, is an intrinsic and inseparable element of that.

Something Else by S. Victor Aaron