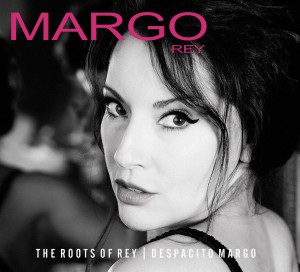 Margo is a high-energy, self-motivated singer...What she does with a melody and a groove is just gorgeous! It's no wonder, she has exploded on to the music scene.
BBC Radio

Los Angeles-based singer, songwriter, arranger and producer, Margo Rey, has had a rich career of performance and songwriting, including eight Billboard Top 20 hits over the years.The Roots Of Rey is Margo conceptualizing and embracing her roots as an accomplished Latin Jazz musician, presenting a modern American & Latin American songbook reimagined for the times. Performed by Rey in English and Spanish and arranged by multi-Grammy-winning pianist, Oscar Hernandez (Spanish Harlem Orchestra), the 13 songs cover some of the most memorable work from composers like Leon Russell, Hoagy Carmichael, and Michel LeGrand, and also includes an inspired 10-year anniversary salsa arrangement of Rey's original jazz composition, My Heart's Desire. "...a velvety sensuality within which one can discern a very well trained voice. Fans of Nora Jones and Sade have much to celebrate because the intimate vocalizations of Margo Rey with her rich and sensual voice evokes these figures but in Rey's case, she does it with a personal and modern twist." - American Airlines Magazine.

Reviews of The Roots of Rey | Despacito Margo

Midwest Record (Chris Spector)
Giving chestnuts a Latin tinge, this jazz vocalist with a serious art bent knows how to make it work better than it should. No stranger to the top of the charts, she blends her skills in a most tantalizing way. Fun stuff jazz vocal fans looking for something new and different are sure to enjoy. ...

Jazziz (Ediitor)
The seductive arrangements of multi-Grammy-winning Latin-jazz arranger Oscar Hernandez and eight-time Billboard-charting singer-songwriter Margo Rey are undeniably beautiful. The Roots of Rey is an intimate, well-timed album comprised of 13 tunes from the Latin and American songbooks, re-imagined for contemporary times. Take Rey's version of "A ...