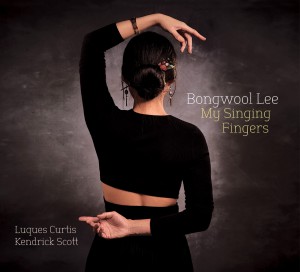 ...a unique blend of strong melodies, rich harmonies, and a beautiful balance of accessible and unpredictable...I truly enjoy hearing her play.
Taylor Eigsti

From Seoul, Korea, New York-based jazz pianist and composer Bongwool Lee was exposed to music from an early age and was quickly considered a musical prodigy, winning Korea's acclaimed Samik Competition at 7. Her focus later shifted from Classical to the world of Jazz upon hearing Oscar Peterson on the radio. Earning her Master's at the Manhattan School of Music in 2012, Bongwool has since found herself at the forefront of NYC's Jazz scene. Her debut recording's title, "My Singing Fingers," represents Lee's releasing of her lifetime study of advanced music theory, allowing the melodies and harmonies to flow directly from her head and heart through her fingers. With her newfound musical friends - bassist Luques Curtis and drummer Kendrick Scott - Bongwool offers nine very personal compositions in a rich sonic package that heralds a bright musical future.

Reviews of My Singing Fingers

All About Jazz (Dan McClenaghan)
The music of pianist Bongwool Lee has a hopeful feeling. The Korean-born and now New York-based artist drew her first jazz inspiration - after classical studies in her homeland - from the work of Oscar Peterson, who sent much musical time walking on the sunny side of the street. But where Peterson rolled mostly in the jazz standards/Great American ...

All About Jazz (Paul Rauch)
4-STARS Much has been written about the different creative processes engaged between classical and jazz musicians, more specifically, as applied to the collective worlds of jazz and classical piano. New York based pianist Bongwool Lee has an intimate relationship with these perceived differences. Born and raised in Seoul, Korea, she was exposed by ...

Jazz Weekly (George W Harris)
Bongwool Lee forms a trio with Kendrick Scott/dr and Luques Curtis/b for a collection of mostly originals. The sole cover is a pastel themed "Bye Bye Blackbird" which as the leader sashay with Scott's brushes, while Lee goes elegiac on a solo "Burning Incense." The team gets assertive on "Repeating Nightmares" and is fun and quirky as Scott gets ev ...

DiscUnion (Japan) (Editor)
Born in Seoul, Korea, debut work by a woman pianist, Bongwool Lee, living in NY. Piano trio work with Luques Curtis on bass and Kendrick Scott drumming - a rhythm team representing NY. Taylor Eigsti joins in on the fender Rhodes on the 8th song, and he has acclaimed that her music is "a strong melody, rich harmony, and a unique blend of unpredictab ...

DOWNBEAT (Dan Ouellette )
Bongwool Lee's Jazz Epiphany Call it a revelatory jazz moment. As a classical music prodigy in Seoul, South Korea, pianist Bongwool Lee was listening to the radio one day when she heard the graceful but sturdy sound of Oscar Peterson. "I'd listened to the radio every day since I was very young," said Lee, who today is based in New York. "When ...

Bird is the Worm (Dave Sumner)
Sometimes you just want to sit back with a piano trio recording that plays it nice and straight, and patiently dives into a melody to explore every inch. The debut from Bongwool Lee will definitely fit that need. The pianist straddles that middle ground where old-school jazz bleeds into the modern post-bop, and so the music is always plenty livel ...