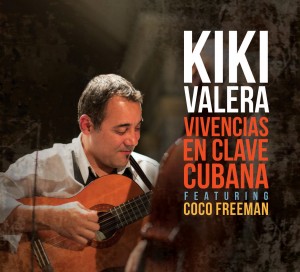 ...one of the world's greatest exponents of the cuatro...Valera specializes in son, the infectious call-and-answer Cuban song form, but solos like a jazz guy.
The Seattle Times

"Vivencias en Clave Cubana" is the debut solo album of Cuban cuatro master Kiki Valera, a member of the Familia Valera Miranda, a century-old group and one of the most important purveyors of the Son Cubano. While completely dedicated to the performance of traditional Cuban music, Valera was exposed to Pat Metheny, Wes Montgomery and Chick Corea through cassette tapes while in school and those jazz inspirations elevate the quality of his cuatro solos in subtle and beautiful ways. Joined here by childhood friend, reknowned Cuban vocalist Coco Freeman, Valera and his exciting ensemble pair 12 original songs with beautiful instrumental work in ways that will make you dance, laugh, and possibly shed a tear. Cuba's traditional music has a history of constant evolution from its very beginnings. With "Vivencias en Clave Cubana," Kiki Valera continues in that spirit.

Midwest Record (Chris Spector)
Valera comes to making a great record organically. He's part of a 100 year old Cuban music dynasty and he was influenced by seminal jazzbo guitar greats. Then he hit's the bulls eye in crafting the kind of set that maintains it's ethnic purity while being the kind of stuff that completely knocks gringos off their pins. Here's the acid test: if you ...

All About Jazz (Paul Rauch)
Son Cubano is a genre of music and dance originating from the hill country of eastern Cuba during the 19th century. Its origins are a blend of African and Spanish influences. Son vocal style and meter are of Spanish tradition, while its identifiable clave rhythm, call and response, and percussive elements are of Bantu origin. Over the past centu ...

KZSU - Stanford (Tom McCarter)
Son Cubano is a genre of music and dance originating from the hill country of eastern Cuba during the 19th century. Its origins are a blend of African and Spanish influences. Son vocal style and meter are of Spanish tradition, while its identifiable clave rhythm, call and response, and percussive elements are of Bantu origin. This disc contains> tw ...

Latin Jazz Network (Raul da Gama)
It's odd to think that a recording in 2019 could be deemed to have become "historic" upon its release, but this one – Vivencias en Clave (Featuring Coco Freeman – by Kiki Valera actually is; and it is historic in more ways than one. First of all, decades into his life as a musician – and that too one from the fabled Familia Valera Miranda wit ...

Jazz Weekly (George W Harris)
Cuban sounds of joy are delivered by Kiki Valera, who plays cuatro, guitar and percussion as he features the bel canto voice of Coco Freeman and a snappy team of Alex Baro/tp, Jose Alayo-Yanill Nario/b, Pedro Vargas/perc and guest vocalists Carlos Cascante, Joshuah De Jesus and Steve Guasch. The tunes are mostly composed by Valera and Freeman and a ...

Earshot Jazz (Paul Rauch)
The legacy of Cuban cuatro master Kiki Valera began with one of the most influential bands in the history of Son Cubano—La Familia Valera Miranda. The current Seattle resident has released an album of twelve original compositions on the highly regarded Origin Records label. Valera's innovative approach to improvisation is well within the Son ...

Roots Music Report (Joe Ross)
5-STARS Kiki Valera opens his debut album with "Mi Son," a tribute to Son Cubano, the music that originated in eastern Cuba in the late 1800s by black and mulatto musicians, and then incorporated both African and Spanish elements as it gained universal appeal. We learn that the music comes from the hills ("mi son viene de la loma"), has lyrics sun ...

Musicalmemoirs's Blog (Dee Dee McNeil)
This is a Cuban production full of happy and joyful music. These musicians create the kind of excitement that encourages you to have a party or at least to get up and dance. Kiki Valera is a Cuban Cuatro master and a member of the Familia Valera Miranda. The ‘Cuatro' is a stringed instrument, smaller than a guitar and more the size of a violin. I ...