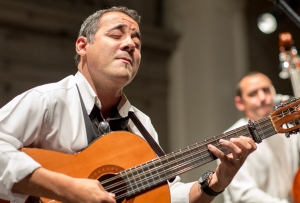 ...one of the world's greatest exponents of the cuatro...Valera specializes in son, the infectious call-and-answer Cuban song form, but solos like a jazz guy.
SEATTLE TIMES

If you are a truly keen observer, following Cuba's rich trove of wonderful music can sometimes resemble viewing wildlife in a dense tropical forest. Each time you look, you might see something vital that you didn't notice before. There are occasions when groups and artists were hiding in plain sight for years before finding their way into a studio. The history of the Familia Valera Miranda is one of those occasions. Although family members have been quite active since the 1800s in the rural Oriente province, and later in Santiago de Cuba and Guantanamo, it wasn't until 1982, thanks to the research of musicologist Danilo Orozco and his important work Antolog'a Integral del Son, that they released their first recordings as a family, later followed by many additional recordings and international fame. Today they are properly acknow-ledged as one of Cuba's most distinguished families that defend the Son cubano. In 2019, the importance of the musical influence of immigrants from the Canary Islands in the development of the Son and campesino music (mixed with roots from Africa) was recognized during Cubadisco, and those influences inform the melodies of the Familia Valera Miranda.

Kiki Valera's debut solo album Vivencias en Clave Cubana, like the first recording of his family, comes relatively late in his career, although he appears in numerous albums with his family and with others. The eldest son of Familia Valera Miranda's leader Felix Varela Miranda, who just passed away in November 2018, Kiki was introduced to the tres when he was six years old by his father. He later attended the Conservatorio Esteban Salas in Santiago de Cuba to study classical guitar. During his time as a student, he discovered his chosen instrument, the cuatro, while watching a street musician playing one. He was so enamored of its sound and the extra possibilities offered by the fourth pair of strings (the tres has three pairs) that he built his own instrument and developed his own technique of playing, tuning and fingering. Although the conservatory did not teach jazz, Kiki passionately listened to jazz cassettes by several artists including Pat Metheny, Wes Montgomery and Chick Corea. Although he continues to faithfully defend Cuba's traditional music, his jazz exposure elevates the quality of his cuatro solos in subtle and beautiful ways. It isn't campesino jazz exactly, but there IS a certain something extra in his style, and he is universally considered a master of the instrument by those who are familiar with his work. Along the way to this album, Kiki was also a co-founder of Septeto Turquino and performed with Los Karachi in addition to his work with the Familia Valera Miranda and his collaborations with many of Cuba's traditional stars. Now based in Seattle Washington, Kiki still regularly returns to Cuba to record.