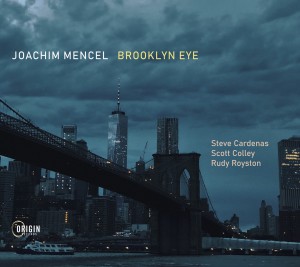 Above all...Joachim's phrases...have this melodious charm, which is available to only the greatest of pianists.
Paweł Baranowski, Diapazon (Poland)

Celebrated Polish pianist, composer, lyricist, and a foremost proponent of modern jazz on the hurdy-gurdy (vielle à roue), Joachim Mencel has a wide-ranging career composing for film, orchestras and ballet, touring with his jazz projects, or appearances with giants such as Lee Konitz, Dino Saluzzi, Richard Galliano, Dave Liebman, Eddie Henderson, Charlie Mariano, and many others. Though he's experienced performing in America before, including being a part of the Monk Piano Competition in 1989, Brooklyn Eye is the realization of a dream forged in his youth behind the iron curtain. Recording compositions that were informed by the culture, musicians, harmonies and feelings of America, and then to record in New York City with several vital improvisors whose music has inspired him for years - guitarist Steve Cardenas, bassist Scott Colley and drummer Rudy Royston - Mencel terms Brooklyn Eye, "a symbolic, idyllic place where dreams come true." Recorded the day after Notre Dame Cathedral burned in Paris, a palpable melancholy presided over the session, adding further dimension to this pivotal experience in Mencel's musical life.

Era Jazzu (Poland) (Dionizy Piątkowski)
Joachim Mencel is an experienced pianist and composer, a respected arranger and producer of vocal music. But he is also the author of many interesting music projects, the most important of which is certainly the jazz cantata "Love explained everything to me" (for jazz combo, string orchestra, boys' choir and soloists), cooperation with the English ...

Brullion 24 (Warsaw) (Piotr Iwicki)
The essence of art is to find your own language as a creator. Talk to the recipient with new things, do not bore him with variations "on a theme", force him to reflect, focus attention. This is the case with the new album by Joachim Mencel, recorded with American jazzmen from the proverbial TOP. Steve Cardenas, Scott Colley and Rudy Royston are ...

Midwest Record (Chris Spector)
A protean Polish piano cat realizes a long held dream of recording in America with some real jazz hitters. Giving it a solid go on a program of his own originals, the cats are solidly behind him as he leads the charge. High octane, modern stuff that just keeps coming, the chops bowl you over and leave you with nothing left to do but enjoy it whil ...

Adam Baruch.com (Israel) (Adam Baruch)
This is an album by Polish Jazz pianist / composer Joachim Mencel, recorded in US with three American musicians: guitarist Steve Cardenas, bassist Scott Colley and drummer Rudy Royston. The album presents ten original compositions, all by Mencel. In addition to the piano, Mencel also plays the hurdy-gurdy, which is usually associated with Folk musi ...

Esensja (Poland) (Sebastian Chosiński)
Dreams are there to make them come true! Polish jazz pianist (also playing the hurdy-gurdy) Joachim Mencel dreamed of recording an album in New York for years, with American artists accompanying him. The assumption was that the music was also inspired by North America. All this was achieved in one fell swoop thanks to the publishing house "Brooklyn ...

JazzPress (Poland) (Editors)
Record of the Week The idea to record an album in the USA with musicians recognized there is not something particularly original in the jazz world. However, few have enough courage and determination to make their dreams come true, and even fewer musicians manage to create a musically interesting album. Joachim Mencel, who not only invited excellen ...

Laboratorium Muzycznych Fuzja (Poland) (Marcin Puławski)
"Brooklyn Eye" is a dream come true to record an American-inspired album and to do it in New York, together with American musicians." - its author Joachim Mencel. Listening to the recording, it is easy to come to the conclusion that the pianist has more than fulfilled his dream, because in addition to being inspired by America, he smuggled content ...

Jazz'halo (Belgium) (Georges Tonla Briquet)
Polish pianist and composer Joachim Mencel finally realized his dream of life with 'Brooklyn Eye': a recording in the heart of New York with notables from the jazz scene from there, more specifically Scott Colley, Rudy Royston and Steve Cardenas. Not that Mencel is a novice. He has been composing for film, orchestra and ballet for years and has ...

Gość Niedzielny (Poland) (Piotr SACHA)
Lyrically How to make big dreams come true? Joachim Mencel found the answer. An outstanding jazz pianist, also known on the scene of Christians from the New Life formation, thought about recording his own material in a New York studio in the company of eminent American instrumentalists. Later he moved to words, and from words to deeds, that is, ...

Jazz Forum (Poland) (Piotr Iwicki)
5-STARS We have an amazing album. And it is not about the registration of the album signed by a Pole in the USA, surrounded by local giants of the jazz scene, or the world distribution resulting from the fact that it was released by a renowned label, but about the sound and complete negation of the artistic carbon paper. The faith of Joachim Me ...

All About Jazz (Dan Bilawsky)
4 1/2 STARS Growing up under the weight of communism in Poland in the late '60s and early '70s, Joachim Mencel dreamed of the freedoms and wonders of America. Stateside relatives sent food parcels, offering him his first tastes of Hershey's chocolate and the inviting aromas of Maxwell House coffee; and Polish public radio station Trójka filled hi ...

Jazz Weekly (George W Harris)
Playing both piano and hurdy-gurdy, Joachim Mencel creates a wide variety of atmospheres with his post bop team of guitarist Steve Cardenas, bassist Scott Colley and drummer Rudy Royston. Colley and Royston are most flexible here, creating a circle dance on the dramatic "I'm Yo Man", mixing suave brushes and beat on "The Things" and rocking out wit ...

AxunArts (Poland) (Mateusz Kołodziej)
Joachim Mencel grew up in a country where at the end of the 1960s and the beginning of the next decade, people did not bask in luxury (although part of the society probably did not complain). The constant fight for freedom, an attempt to overthrow the power controlled from Moscow, dreams of a better life - preferably in the United States, which wer ...