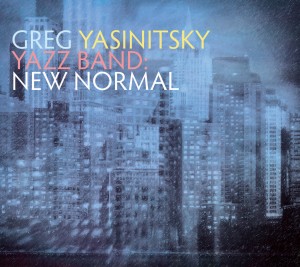 Hard charging, high octane stuff that never lets you down, or even comes up for air, this is a must for big band fans...Killer stuff.
Midwest Record

Saxophonist, composer, arranger Greg Yasinitsky created his YAZZ Band project as a laboratory for his contemporary, original little big band compositions. Made up of mostly Pacific Northwest-based improvisors and ensemble veterans, "New Normal" reflects the times when gathering as a group is not an option. Recorded ensemble tracks from before COVID-19 emerged were combined with recordings done in isolation from faraway outposts including Los Angeles, Baton Rouge, and Italy, allowing for some dynamic new musical options to be explored. From the blazing "G.P." and "Diva," to the heartfelt "Song for Laura," or the funk of "Blues for Brecker," Yasinitsky's YAZZ Band offers a wide ranging set of hard-swinging and joyful original music.

Midwest Record (Chris Spector)
A proven swinger rallies his troops up to the fact that the tracks they started before Covid got started will have to be finished remotely if they are to be finished at all. This is one leader that doesn't have to worry about getting fragged by friendly fire as they rise to the challenge. Sounding delightfully seamless, this hard charging crew ma ...

All About Jazz (Jack Bowers)
4-STARS As one good album clearly deserves another, Greg Yasinitsky, who wears many hats—composer, arranger, woodwind specialist and educator among them—has released New Normal, the second impressive outing by his admirable Washington state-based ensemble, the YAZZ Band, which varies in size from septet to tentet. Unlike Yasinitsky's earlier a ...

Jazz Weekly (George W Harris)
Greg Yasinitsky wrote and arranged all the music here, as well as plays every type of sax along with his rotating 10 piece band of hard swingers. The Tunes are all upbeat and muscular, with everyone getting a chance in the spotlight. The leader's tenor teams with Vern Sielert's trumpet on the pumping opener "GP" while a more romantic "Song For Laur ...

Bebop Spoken Here (Lance Liddle)
Back in 2018 I was impressed by Yasinitsky's recording - Yazz Band - in fact it was one of my Big Band CDs of the Year. After first listen, this one could also be in with a shout although, despite there being 16 names listed, it is actually a collective grouping with the various units ranging from 7 - 9 pieces and, truth to tell, due to the pandemi ...