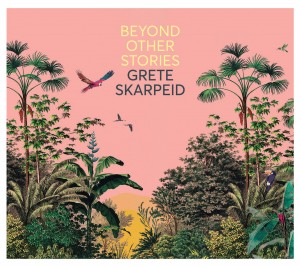 Norwegian vocalist/composer Grete Skarpeid's "Beyond Other Stories" is contemporary word painting at its finest, with rhythmic contours beautifully enhanced by a quartet of master musicians, led by Cuban pianist Aruán Ortiz. Skarpeid draws us into the interior landscape of life with an eerily beautiful sense of freedom in her voice, mixing melancholy and joy, vulnerability and splendor. Ortiz's beautifully crafted arrangements of variety and sensuousness, are captured in every caressed phrase by Skarpeid. The music shines from the ethereal magnificence of "Singing Again," which sets to music a poem by the noted Norwegian poet Olav H. Hauge, through the feelings of spiritual loss evoked in "Adam and Eve," to the existential weightlessness of "Flying High." The unlikely musical partnership of Grete and Aruán began by happenstance when Ortiz passed through Grete's remote hometown while touring Norway with Don Byron. Grete shared some of her original songs with Ortiz, who instantly fell in love with her music and encouraged her to write more, later collaborating in New York on Skarpeid's first album, "My Songs" in 2016.

Reviews of Beyond Other Stories

Avisa Hordaland (Norway) (Bjorn Sandnes)
Cinderella story The story of how Grete Skarpeid released her debut album "My Songs" at the age of 59 is almost like a Cinderella story. She and the Cuban jazz pianist Arúan Ortiz met after a concert he had played in Voss Jazz Club in Gamlekinoen. He caught sight of Skarpeid, sat down with her and wanted to talk. He invited for wine. And they tal ...

JAZZiNORGE (Norway) (Camilla Slaattun)
JAZZ PROFILE: Grete Skarpeid just released her second album, "Beyond Other Stories", arranged and produced by Aruan Ortiz. A film team has followed Skarpeid and her collaboration with Aruan for four years, and this autumn the documentary Grete - and the Cuban pianist will be released. Hi, Grete, how are you doing in these challenging corona tim ...

Midwest Record (Chris Spector)
When a foreign born jazz singer doesn't fall under the spell of the tortured artist effect, the record is already off to a good start. A Norwegian singer and writer that takes her time between releases teams up with a Cuban piano man and they find a sweet spot where they can turn jazz into art (as it) freely and easily it colors outside the lines. ...

Jazz Weekly (George W Harris)
Folksy-voiced Grete Skarpeid mixes originals, poetry and a standard together on this album that has her backed by Aruan Ortiz/p, Rob Waring/vib-perc, Cameron Brown/b and Gerald Cleaver/dr. Her delivery and style is reminiscent of 70s singers, as she gets elliptical like Joni Mitchell on "Like A Bird" and "Holding" while is ethereal like Judy Collin ...

Textura (Ron Schepper)
A wonderful partnership began when Afro-Cuban pianist Aruán Ortiz, then on a Norway tour with jazz clarinetist Don Byron, met Grete Skarpeid at the Voss Jazz Club. When the Norwegian singer-songwriter shared her material with Ortiz, he was completely won over, so much so it led to their working together on her debut album My Songs in 2016. Pooling ...