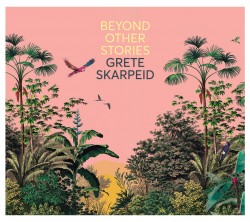 A wonderful partnership began when Afro-Cuban pianist Aruán Ortiz, then on a Norway tour with jazz clarinetist Don Byron, met Grete Skarpeid at the Voss Jazz Club. When the Norwegian singer-songwriter shared her material with Ortiz, he was completely won over, so much so it led to their working together on her debut album My Songs in 2016. Pooling their talents again, Beyond Other Stories features tens songs that blend her distinctive voice and songcraft with his thoughtfully considered arrangements and production. Recorded in Astoria, New York in September 2018, the album finds the pianist, vibraphonist Rob Waring, bassist Cameron Brown, and drummer Gerald Cleaver enhancing Skarpeid's material with jazz-inflected accompaniment sympathetic to the character of each song.

Beyond Other Stories is no middling expression of teenage angst but rather a statement by a mature artist who's seen and done much and with life experiences to share. The songs cast a wide net, with some breezy and free-spirited and others attuned to life's sadder moments. Skarpeid's voice is robust, its tone and delivery marked with personality; the second she appears, it's clear who's singing. While music is central to her life, it's not the whole story: armed with a graduate degree in music therapy, she's a qualified speech therapist in her Voss hometown and has sung in multiple contexts, including with a women's choir. Her interest in jazz, especially in terms of its rhythmic flow and improvisational aspect, intensified after two years singing with the Freiburg jazz choir in Germany. That said, you won't hear her scatting on Beyond Other Stories and neither will you hear indulgent runs, Skarpeid preferring instead to humbly tailor her singing to the song.

She's certainly no slouch in the melody department, as the sinuously seductive "Singing Again" shows at the start. Singing a poem by Norwegian poet Olav H. Hauge ("The river deep in my mind is singing again..."), she gracefully navigates the tune's tricky melodic changes, while her partners provide a colourful, ever-complementary backdrop as a supple springboard. Sung in her native Norwegian, the playful "Stille Stille Stille" also charms with its stepwise melodic trajectory. As he does throughout, Ortiz fashions arrangements that support her splendidly. Hear, for example, how effectively a single-note piano ostinato, tom-toms, and vibes reinforce the beauty of the vocal in "Adam & Eve" before an extended trade-off of piano-and-vibes soloing. It's not uncommon for the song-like structure that asserts itself during the vocal part to briefly give way to jazzier soloing until the song form re-establishes itself ("Cats in Crete" even weaves a free-jazz episode into its design), and for a small unit, the musicians resourcefully maximize their instruments' timbral potential.

Perhaps the most affecting song is "The Queen Inside This Room," a spellbinder about cardiac surgery that derives considerable impact from its stripped-down vocal-and-piano presentation and an exquisite melodic line ("I want my heart to beat steady, not too fast and not too slow, not too high, not too low / I want my heart to beat in the middle..."). One cover works its way into the release, a high-flying treatment of Rodgers & Hammerstein's familiar "My Favorite Things," but the music and, the opening song aside, lyrics are otherwise all Skarpeid.

While the liner note detail by Raul Da Gama Rose convincingly argues "there's not a single semiquaver that hasn't been fastidiously considered," Skarpeid never sounds overly studious. There's a naturalness to her delivery and the musicians' performances that makes the album a refreshing delight. She might be something of a well-kept secret in her homeland, but Beyond Other Stories suggests this artist's name should definitely be better known.