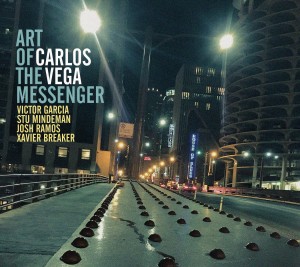 Saxophonist Carlos Vega's band crackles...crafty arrangements, spirited group interplay, and ear-grabbing freshness and spontaneity in their soloing.
All About Jazz

Chicago-based tenor saxophonist Carlos Vega taps into the energy of the hard bop movement of the late 50s, with this quintet session that channels the vision of Art Blakey's iconic Jazz Messengers. Filtering Blakey's forward thrusting style through his Puerto Rican heritage and extensive time spent with latin and salsa bands in his native Miami, Vega's concept reveals itself on the driving opening cut, "Art of the Messenger." Propelled by the powerful rhythms of drummer Xavier Breaker, bassist Josh Ramos and pianist Stu Mindeman anchor the quintet throughout the session, with trumpeter Victor Garcia joining Vega on this formidable front line. Subsequently, Vega turns this hard bop powerhouse on its collective ear with "Bird's Word," a rousing latin jazz homage to Charlie Parker. Vega's take on the hard bop lineage incorporates stops in Chicago and Miami, allowing his mentors to clearly speak through his work. His take on the lexicon through these eleven originals is in no way nostalgic, but expressively looking forward through the lens of personal history.

Reviews of Art of the Messenger

Midwest Record (Chris Spector)
The Latin jazzbo makes a case for music being the international language by springing from his salsa roots into a tribute to Art Blakey and his hard bopping Jazz Messenger days. Showing his chops by doing a tribute through all original material, these messengers here are real crusaders that play the whole jazz and nothing but the jazz. Right on t ...

All About Jazz (Dan McClenaghan)
Tenor saxophonist Carlos Vega is a steeped-in-the-tradition fan of early bebop, displaying his passion for the genre with his nods to alto saxophonist Charlie Parker on Bird's Ticket (2016) and Bird's Up (2017), both on Origin Records. With Art Of The Messenger he shifts his focus to Art Blakey, the drummer who led the Jazz Messengers from 1955 onw ...

All About Jazz (Jack Bowers)
4-STARS In case you didn't quite catch the "message" subtly embedded in the title of Chicago-based tenor saxophonist Carlos Vega's new recording, Art of the Messenger, here is a brief reminder that it was drummer Art Blakey who formed the Jazz Messengers in the mid-1950s and led the celebrated hard-bop ensemble until his death in 1990. The Messeng ...

WDCB, Chicago (Paul Abella)
Carlos Vega's Art of the Messenger might very well end up being a contender for one of my favorite albums of the year. And when you dissect the pieces, it's easy to understand why. First, start off with a who's who of young(ish) Jazz players in Chicago – Vega plays tenor sax and writes the songs. Victor Garcia is the trumpet player, Stu Mindeman ... 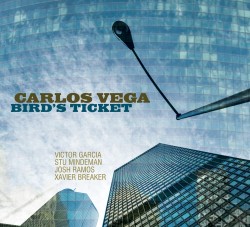