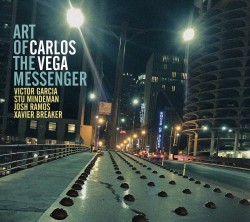 And let's go with jazz, let's go with Carlos Vega. And I'm not referring to the renowned drummer, but to the accomplished saxophonist from Miami, Florida, and, importantly, with Puerto Rican DNA.

The Latin footprint is nothing new in his short solo catalog, composed by Bird's Ticket (2016) and Bird's Up (2017), but it is a natural "up", as is expected in at least most musicians who propose themselves to record a phonographic material. As is the case with Art of the Messenger, recently released by the specialized stamp Origin Records.

Bringing a curriculum that involves names such as Arturo Sandoval , Gloria Estefan and the Miami Sound Machine , Tito Puente Jr. , Chicago Afro Latin Jazz, Ira Sullivan and many others in his range of performances, Vega also teaches sax and holds the position of director of the Latin Jazz Ensemble at Florida Agricultural and Mechanical University in Tallahassee, Florida.

To select the team of musicians to record the album, Carlos didn't think twice. Graduated from the University of Illinois, his immersion in the sonic stage of Chicago was almost automatic, and for that reason he featured Victor Garcia (trumpet), Stu Minderman (piano), Joshua Ramos (bass) and Xavier Breaker (drums).

But, the inspiration came from Pittsburgh, Pennsylvania, or rather from legendary drummer and bandleader Art Blakey . In fact, to be even more specific, from his iconic group Jazz Messengers - hence the connection to the album title.

In this jazz spiral, we visualized 11 turns signaled by both latin jazz and hard bop - jazz subgenre (another one) that is actually an extension of bebop, basically marked by influences from rhythm and blues, gospel music and the blues itself... beyond of possessing a more challenging characteristic in some cases, as if it were a next level - based on ingenious arrangements and, even so, palpable to the ear.

Try the Latinity of "Bird's Word" or the melodic dexterity of "Ode to the Patient Observer," accentuated by Vega's mesmerizing sax, though "Heed the Call" doesn't lag far behind in its attention-grabbing function.

Art of the Messenger is remarkably guided through the prism of Art Blakey's most famous line-up, but at the same time brings a special seasoning for both the traditionalists of the genre, as well as for new listeners, and this is where the success of its mission can be seen: to serve as a messenger. From jazz.