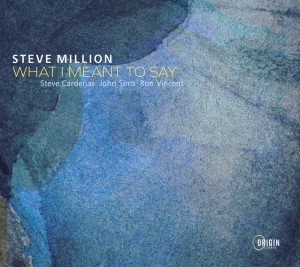 Million doesn't rely on fireworks or flash; the impact of his work comes in the steady accretion of ideas over the course of an improvisation and the gorgeous details of his interaction with the rhythm section.
Neil Tesser

What I Meant To Say is as much about the enduring relationships of these players over several decades as it is about the compositions of Chicago pianist Steve Million. Million met guitarist Steve Cardenas and drummer Ron Vincent when they all lived in Kansas City in the late '70s, and by 1980 they fully realized their musical kinship, performing widely under the name "Four Friends." It was with Million's and Vincent's move to New York in 1981 that the band ceased performing, but the music and camraderie dwelled in their musical hearts ever since. Finally, in November, 2019 they gathered in New York, along with bassist John Sims, to play, enjoy each other's company, and see how the music fared over the decades. "Four Friends" no longer exists, but the music is reimagined by these old compatriots who have since learned much along the way about this sound they shared and developed as young men.

Reviews of What I Meant to Say

Midwest Record (Chris Spector)
Four jazzbos became good friends in Kansas City in the 70s before they drifted away on the sands of time. But it didn't make their friendship drift away as 2019 brought them back together to kick it out as a crew one more time. Deceptively deeper than hotel lobby music, these cats know what to do to power a piano quartet to great heights by break ...

All About Jazz (Jack Bowers)
4-STARS A word that springs to mind when listening to pianist Steve Million's quartet is "tasteful." If the music sounds congenial as well, that is probably because "four friends" are performing it. Two of them (guitarist Steve Cardenas, drummer Ron Vincent) were among the Kansas City-based friends who comprised Million's quartet in that city befo ...

Plastic Sax (Bill Brownlee)
Musicians have long been required to play with tactful quietude if they intend to find steady work in Kansas City's jazz venues. Three outstanding musicians who performed together in Kansas City in the late 1970s and early 1980s subtly subvert the low-key approach on an instructive new album. Joined by bassist John Sims, pianist Steve Million, ...

Jazz Weekly (George W Harris)
Pianist and composer Steve Million creates an impressionistic album with cool toned guitarist Steve Cardenas and the support pulse of John Sims/b and Ron Vincent/dr. Cardenas shows his homage to the ECM sounds of guitar legend John Abercrombie as he works with Sims on "Waltz For Mr. Abercrombie" and solos well on Vincent's upbeat pace on "Situati ...

Take Effect (Tom Haugen)
The pianist and composer Steve Million has had a prolific year, as he also released Jazz Words alongside the vocalist Sarah Marie Young, and here with Steve Cardenas, John Sims and Ron Vincent at his side, Million regroups with some longtime friends for a batch of old and new tunes. "Open The Book" starts the listen with Million's sophisticated ...

WICN (Worcester) (Marty Friedman)
It is not often that we get two CDs released at about the same time, from one artist. Such is the case with pianist and composer Steve Million. His two new CDs are chock full of original tunes. First up we have What I Meant to Say. This project is a true labor of love. The songs, some new, and some written back in the '70s and '80s, all sound fr ...

Kansas City Jazz Ambassadors (Editor)
In the 1980s, Pianist Steve Million lived in a modest neighborhood that is now home to the beautiful Kauffman Gardens in Kansas City. Guitarist Steve Cardenas and pianist Steve Million were half of the Ida McBeth band of the era, along with drummer Jon Cushion and bassist Forrest Stewart. The new Origin release, "What I Meant to Say" is a test ...