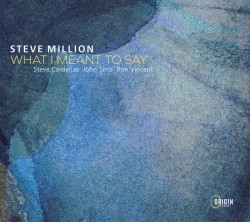 4-STARS A word that springs to mind when listening to pianist Steve Million's quartet is "tasteful." If the music sounds congenial as well, that is probably because "four friends" are performing it. Two of them (guitarist Steve Cardenas, drummer Ron Vincent) were among the Kansas City-based friends who comprised Million's quartet in that city before he moved to New York in 1981; the "new friend" is bassist John Sims who started gigging with the group shortly before What I Meant to Say was recorded in November 2019.

So this is a "reunion" of sorts, one in which Million not only plays elegant piano but wrote and arranged every number, all of which are well above the norm, especially the rapid and rhythmic "Old Earl," newly minted "What I Meant to Say," snug and swinging "Situations," smooth and synchronous "Waltz for Mr. Abercrombie" and the graceful, groovy "Blue Lizard." The others—"Open the Book," "The Company," "My Explanation," "Missing Page" and "Azusa Dreams"—are no more than a short step behind. The quartet opens with the leisurely "Open the Book," written by Million to mark his daughter Peige's first birthday. (He could have called it "Turn the Peige" but covers that ground later via the introspective "Missing Page"—and the original title of "Open the Book" was "Open the Book to Page One.")

Sims solos admirably on "Missing Page," as he does on five other tunes, while Vincent has his say on "Situations" and "Blue Lizard." As for Cardenas, he is, like Million, a calm and steady presence throughout, whether comping handsomely or bringing to bear his eloquent solo voice. He and Million comprise a winning team, one whose every move is impressively underscored by new friend Sims and old friend Vincent.