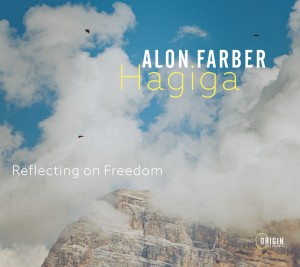 ...a fantastic find...Such is Farber's brilliance as a songwriter and arranger—he takes the best from each of the traditions he calls upon, uniting a wide array of colors towards the common end of an exciting, celebratory music.
All About Jazz

Now entering its third decade as an ensemble, Hagiga's founder, saxophonist Alon Farber looked to Eddie Harris's "Freedom Jazz Dance" as inspiration and a theme for their 4th recording, Reflecting on Freedom. Hagiga revels in the diversity of musical flavors and colors that make up the "Israeli soundtrack." With an exciting three horn frontline - reminiscent of some Dave Douglas or Booker Little ensembles - they draw liberally from Swing, Moroccan, Funk and Brazilian musics in creating their wide-ranging, highly personal sound. Farber's bold compositions reflect his years at the forefront of Israel's jazz scene - including co-founding the Israeli Jazz Orchestra & receiving the Prime Minister's Award for Jazz Composers - and his time in America while studying at Berklee, where he won the Wayne Shorter Award for Composers.

"Hagiga has been at the forefront of the miraculous envelope-pushing curve of Israeli jazz for some years now." - Barry Davis

Reviews of Reflecting On Freedom

Midwest Record (Chris Spector)
Is it world jazz or is it fusion if it comes from Israel and incorporates other local musics? Does it matter? Now entering it's third decade, this ensemble snake charms, belly dances and parts the waters with chops to spare. Opening the ears to jazz pouring out of Israel, these vets and pros are some really sterling travel guides to new sonic l ...

All About Jazz (Jack Bowers)
Israeli saxophonist Alon Farber's Hagiga (in Yiddish, "celebration") is exactly that—a warm tribute to contemporary jazz from the Middle East to South America and beyond, ably performed on the group's fourth album, Reflecting on Freedom, by half a dozen well-schooled Israeli musicians and—on several of the album's nine tracks—special guest pe ...

JazzFM (UK) (Ruth Fisher)
The fourth album from Alon Farber's Hagiga band was inspired by Eddie Harris's 'Freedom Jazz Dance' and is a gorgeous blend of musical flavours and colours, swing, Moroccan, funk and Brazilian music that makes up that melting pot of the Israeli soundtrack. But, it was Alon's arrangement of 'You'll See The Way' that really hooked me onto this alb ...

Longplay (Budapest) (Robert Ratajczak)
Saxophonist and composer Alon Farber (a graduate of the prestigious Berklee College of Music) is today one of the leading Israeli jazz musicians. The artist is a member of the Israel Jazz Orchestra and is the founder of the Alon Farber Hagiga band, existing since 2001 , which debuted phonographically in 2005 with the excellent album " Exposure ". T ...

Distrito Jazz (Spain) (Editor)
Alon Farber is an Israeli saxophonist who has just released, along with his Hagiga sextet, 'Reflecting on Freedom', making it the fourth in his career. The Israeli jazz scene could not be more interesting, as can be seen with names like Avishai Cohen , Anat Cohen , Yaron Herman or Omer Avital, among others, or the presence of Alon Farber himself ...