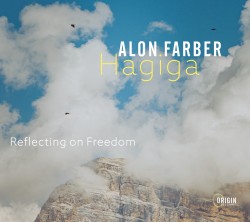 Saxophonist and composer Alon Farber (a graduate of the prestigious Berklee College of Music) is today one of the leading Israeli jazz musicians. The artist is a member of the Israel Jazz Orchestra and is the founder of the Alon Farber Hagiga band, existing since 2001 , which debuted phonographically in 2005 with the excellent album " Exposure ". The formation has performed at the most important jazz festivals in Europe, including Red Sea Jazz Festival , Paris Jazz Festival or Copenhagen Jazz Festival. Currently, the band's line-up with Farber playing soprano and alto saxophones consists of: Yehonatan Cohen (tenor saxophone, flute and clarinet), Odet Meir (trombone), Eden Giat (piano), Assaf Hakimi (double bass, bass guitar) and Roy Oliel (drums).

Fourth in the band's discography album its title owes composition of Eddie Harris's " Freedom Jazz Dance ", which, together with the song Farber " Reflecting on Freedom " was given was in the form of one recording.
In addition, the board issued effort respectable American label Origin Records outside of premiere compositions by Alon Farber we will find two pieces by the trombonist Oded Meir (the opening program full of lightness " Israeli Song " and the Latin rhythm " Theme for Michal "), the author's development of traditional Moroccan songs" Hammoud "and bossa nova Matti Caspi and Shimrit Ora" You'll See The Way , "which sings taking a guest part in three recordings, singer Zak Sarai-Levi.

Another guest on Hagigi" Reflecting he Freedom "is adorned his playing five of nine recordings on the disc, percussionist Rony Iwryn.

In music formations will find a lot of different influences: from the classic swing (" Fresh start ") by Brazilian samba and bossa nova (" Theme for Michal "and " You'll See the Way "), the atmosphere of the Middle East ("Hammouda "), and on a fiery funk ("Farbalak ") having finished.

All this makes the album is characterized by diverse sound and extensive formula of style, all very subtly soaked is the spirit of Jewish folklore. In turn, the band's instruments evoke associations with Wayne Shorter's historical formations.

Despite the fact that the band's line-up over the past twenty years has undergone many personal changes, Hagig Alon Farber has his own recognizable style and sound, which is the work of her creative and gifted giant musical fantasy of the leader. Excellent album!