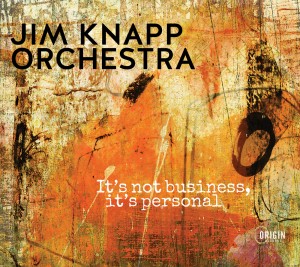 Jim Knapp's music is full of intensity, emotion and creative textures. His music should be more known. It's among the best of orchestral jazz...
MARIA SCHNEIDER

The career and music of Seattle-based composer/arranger and trumpeter James Knapp is a known and respected quantity in the inner circles of jazz music, inhabited by its musicians, bandleaders, journalists and educators. Those fortunate enough to gain awareness of the intrinsic beauty of his music place the work of his Composers and Improvisers Orchestra of the '70s-'80s and his more recent assemblage, the 13-piece Jim Knapp Orchestra, in the upper echelon of modern jazz composition. For this 2009 session, we find the band focused and in top form, as it often was during a very active period in the early 2000s. Made up of a highly creative collection of colleagues from the Cornish College of the Arts, former students, and Seattle professionals, the music was approached with seriousness, dedication and honor, with the fun and fulfillment that comes with that level of involvement very evident.

Reviews of It's Not Business, It's Personal

Midwest Review (Chris Spector)
A 2009 date from one of the great modern jazz insiders that can wrap a big band around his little finger, no less than Maria Schneider confirms all this in doing her part to help make his work get wider renown. This is a highly right on stop to make for jazz orchestra that almost the last word on the subject. Great playing and writing throughout. ...

Take Effect Reviews (Tom Haugen)
The Seattle composer, arranger and trumpet extraordinaire Jim Knapp knew his way around a diverse jazz tune you won't soon forget, and here along with a large handful of esteemed musicians he brings a big band effort that's quite distinct and exciting. "Miami Vince" starts the listen with no lack of energy, as Jon Hamar's frisky brass welcomes ...

JazzTimes (Mark Stryker)
There are two kinds of jazz listeners. Those who recognize Jim Knapp as a profound large-ensemble composer and arranger of uncommon imagination, depth, and expression—and those who have yet to hear his music. Knapp, who died November 13 at age 82, was a revered bandleader, composer, arranger, trumpeter, and teacher in the Pacific Northwest. He ...