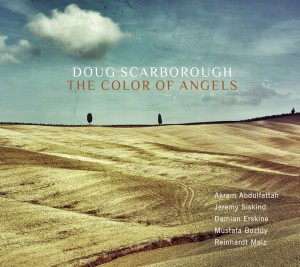 ...Some of the most interesting, original music coming from anybody in a long, long time.
Bill Watrous

Composer/trombonist Doug Scarborough presents a compelling collection of new works, fusing music of the West - jazz, with overtones of classical and prog rock - and traditional Middle Eastern elements. Setting the stage with his 2015 release Bridges, where he introduced the trombone to the world as an instrument capable of expressively playing Arabic scales (maqamat), The Color of Angels is a riveting follow-up as he retains the dynamic core of collaborators, Jeremy Siskind on piano, bassist Damian Erskine, and engineer/producer Bob Stark, while adding the distinct voices of violin virtuoso Akram Abdulfattah, Mustafa Boztüy on darbuka and the dynamic drummer, Reinhardt Melz. Possibly reminiscent of some recent projects by Nate Smith, Ibrahim Maalouf, or bassist Avishai Cohen, Scarborough's musical vision is exciting, surprising and cinematic in scope.

All music by Doug Scarborough

Reviews of The Color of Angels

All About Jazz (Jack Bowers)
4-STARS The Color of Angels, an engaging album by trombonist Doug Scarborough's sextet, blends music with a jazz heart and Middle Eastern temperament. Scarborough, who teaches at Whitman College in Walla Walla, Washington, has worked toward expanding the jazz idiom to encompass rhythms and harmonies from countries and regions not usually associate ...