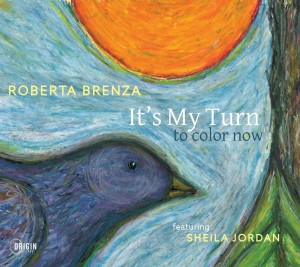 Her delightfully casual and welcoming voice, defying gravity in a manner not unlike a legend such as Blossom Dearie or peer Kat Edmonson, has the special charm that's easy on the ears with the potential to stir your heart.
John Ephland

Coming to performing later in life, Chicago-based vocalist/songwriter Roberta Brenza makes the most of this debut recording experience as she enlists a brilliant team of playmates — producer & drummer Matt Wilson, pianist Dawn Clement, bassist Cameron Brown, and saxophonist Stacy Dillard, along with special guest, legendary vocalist Sheila Jordan. Together they sculpt an intriguing set of thoughtfully arranged songs such as "Watch What Happens" and "Bye Bye Blackbird," jazz standards like "Take Five" and Don Cherry's "Art Deco," along with two revealing Brenza originals. Having lived in both French and Italian-speaking cultures, she also offers fresh takes on "Les Feuilles Mortes (Autumn Leaves)" and "Estate." Channeling the long-developing feelings of music she was first exposed to as a child listening to her father's collection, Brenza presents as a full-formed package, revealing new insights from the lyrics as she paints from a vibrant musical palette.

Reviews of It's My Turn to Color Now

Jazz Weekly (George W Harris)
On the cover, vocalist Roberta Brenza doesn't wear her singing influence on her sleeve, but on her T-shirt, as a picture of bop pioneer Sheila Jordan peeks through with a smile. Her presence is felt and heard here, as Brenza mixes bop and modern jazz with a team of Stacy Dillard/ts-ss, Dawn Clement/p-key, Cameron Brown/b and Matthew Wilson/dr. Jord ...

Jazz Views (UK) (Derek Ansell)
Any jazz vocal album that features Sheila Jordan as a guest on two selections is worthy of close investigation and this one is no exception. Not that the veteran jazz singer is the only attraction here as Ms Brenza gives a sterling performance throughout this programme. The opening title song swings away merrily and it is in fact the singer's ...

WDCB, Chicago (Paul Abella)
A vocalist who grew up near Chicago, and now finds herself back here again, Roberta Brenza recently released her debut album on Origin Records, It's My Turn to Color Now. She's joined by Sheila Jordan (obviously a big influence) and a band assembled by Matt Wilson for a batch of originals like the charming title track and standards (she does a wond ...