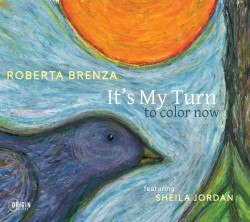 A vocalist who grew up near Chicago, and now finds herself back here again, Roberta Brenza recently released her debut album on Origin Records, It's My Turn to Color Now. She's joined by Sheila Jordan (obviously a big influence) and a band assembled by Matt Wilson for a batch of originals like the charming title track and standards (she does a wonderful job on "Bye Bye Blackbird"). If this first album is an indication of what we can expect in the future from Roberta Brenza, I think we'll be looking forward to some excellent albums down the road.

Other Reviews of
"It's My Turn to Color Now":