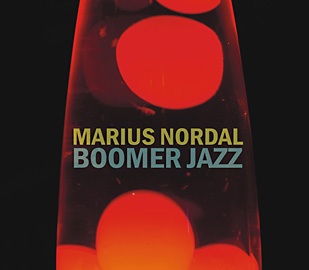 Solo piano is the ultimate challenge: you're all alone, excerpt for those 88 keys flashing their ivories. No other horn waiting to pick up the melodic slack, no additional rhythm guys keeping time. Yet solo piano is a mixed blessing. You assume full responsibility to call the shots: you set the metronome, fall back on rubato whenever the mood strikes, and re-harmonize all over the keyboard without feeling guilty. Final interpretation is up to you.

Apparently Marius Nordal thrives on facing challenges and luxuriating in the blessings. His third release for Origin finds him mostly staying within bar lines, extemporizing at will, happily and nostalgically. He tackles material he grew up with, tunes most of his jazz contemporaries try to avoid because, as Jimmy Rowles often complained, "they just don't lay well." No sexual innuendoes there; it's a given that Boomers flourished in an era when many lines (again quoting Rowles) "sound like 3rd alto parts."

I've never met Mr. Nordal; I'm still new to Seattle's mildewed market, but I feel confident that he's one of the best pianists in a jazz community boasting the likes of Bill Anschell, Randy Halbersdtadt, Bob Hammer and John Hansen. Note the politic expedient of alphabetical listing. Right off the bat, he threatens to treat Chuck Berry's "School Days" like a respectful cover of a Pinetop Smith rendition, but before it's over Marius reveals elements of his own harmonic independence that Pinetop would never imagine. "Scarborough Fair" begins with an imaginative pedal point that reveals another Nordal facet; the remainder is merely lovely. Dig the propulsive left hand ostinato figures that lend "Eleanor Rigby" a momentum that eluded The Beatles. It morphs into a clever, intense fugal section.

If the ending of the Bread tune, "Aubrey," had resolved on a 6th instead of a 9th, I'd say Nordal was, at the time, under the influence of Ravel -- specifically, his "Mother Goose Suite." Paul Simon's durable "Mrs. Robinson" is given some serpentine bass lines agt the outset, sufficient to infuse the track with an effectively funky flavor. If that isn't enough, Nordal interprolates a quote from "Mission Impossiblle." There's another funky foundation, for "Killing Me Softly," but its most salient feature is Nordal's incredibly fluid right hand, which seems to have its own separate motor. There is something so graceful about "Wives and Lovers," I'm reminded how often pianists with the talents of a Marius Nordal are insulted and misunderstood. His interpretation of the lilting waltz (with its Viennese syncopation) is so graceful, so harmonically rich, that I wonder how often he has played requests with the same intensity only to have fans wonder why he failed to fulfill their requests. They simply could not discern the melody from its elaborate packaging.

I have no frame of reference for "Suncatchers," a Nordal original. I only know his composing talents are as formidable as his playing chops.

Other Reviews of
"Boomer Jazz":