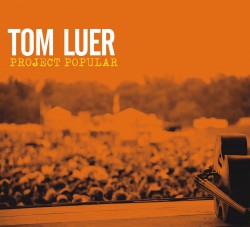 In his liner notes, woodwind expert Gary Foster refers to Tom Luer and his cohorts as "young Jazz artists," but they've been around and play like well-seasoned veterans. Still, their youth is a factor in this music, as Luer acknowledges growing up with such Pop music groups as Pearl Jam, Prince, and Soundgarden, whose music he chose to employ as the impetus for this recording. The leader, an active performer and educator in the Los Angeles area, created his own Jazz arrangements of tunes by the aforementioned groups along with a song each by Coldplay and Prince and three of his own compositions. He manipulates the tunes' original tempos, meters, rhythms, harmonies, and/or melodies in inventive ways that, combined with the band's polished improvisations, result in fresh and interesting first-class Jazz.

Luer is a superb Michael Brecker-influenced tenorist. His beautiful sound is similar to Brecker's, as are his general approach and mannerisms. And his formidable technique allows him to execute even the most challenging passages. Speaking of which, the virtuosic tenor/ guitar unison passage on Coldplay's "Clocks" is remarkable for its accuracy. Guitarist Andrew Synowiec also plays fine mainstream Jazz guitar on such tracks as Luer's "You Should Have Known," but solos effectively with a distorted Rock sound on the leader's Steps Ahead-suggesting "Mind the Gap." Pianist Andy Langham impresses throughout on both acoustic and electric pianos. And drummer Dan Schnelle and bassist Edwin Livingston, required to provide a variety of rhythmic and percussive backgrounds, do so with élan, including the latter's tuneful bowed solo on Soundgarden's "Black Hole Sun."

Two of my favorite tracks are "Black Hole Sun," with its lazy back-beat and blues-drenched tenor lines and Prince's "The Beautiful Ones, with its quietly soulful soprano sax melody and rock-ballad ambiance.

Other Reviews of
"Project Popular":

All Music by Adam Greenberg