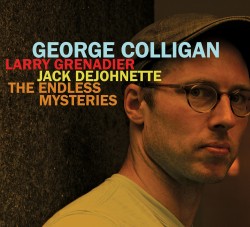 Portland has always enjoyed a wealth of superb jazz pianists. And what was consistently top tier got even better when George Colligan became part of the music faculty at Portland State University. His new CD, his first for Seattle-based Origin Records, is a trio gig with two masterful colleagues, Larry Grenadier on bass and Jack De Johnette on drums. All 10 selections were composed by Colligan who, in the liner notes, provides an explanation for two of the more dramatic tracks. ?Thoughts of Ana? was written in memory of Ana Greene, one of the children who perished in the Sandy Hook tragedy and the daughter of friend and prominent saxophonist, Jimmy Greene. ?Outraged? expresses Colligan?s reaction to the loose gun laws which allowed this horror. On these very serious works and others which are often wistful and thoughtful, Colligan and friends bring us immense creativity, imagination and color. This is a varied musical journey. At one moment brimming in intensity and frustration and, at another, expressing reflection and beauty. We?ll look forward to more from Colligan.

Other Reviews of
"The Endless Mysteries":

All About Jazz by John Kelman