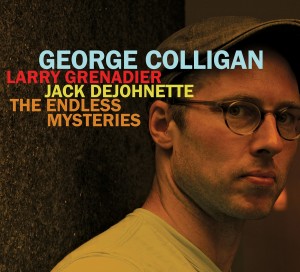 As a member of Jack DeJohnette's touring band for the last several years, pianist George Colligan has developed a striking and powerful musical rapport with the legendary drummer that serves this, his 24th album as a leader, extremely well. With DeJohnette and virtuoso bassist Larry Grenadier, Colligan's ten original compositions positively soar from the deep and masterful interpretations of this incredible trio. "The Endless Mysteries" displays three peerless improvisors at the top of their game and marks a significant moment in time for the classic piano trio.

Reviews of The Endless Mysteries

Midwest Record (Chris Spector)
What do you do when you're Jack DeJohnette's piano man and you feel like improvising but ECM tells you the roster is currently full? You call Larry Grenadier and tell him to bring over his bass, then call John Bishop at Origin and say "have I got a deal for you." This set of originals feels more lived in than improv-ed and a smoking time is h ...

WEMU (Linda Yohn)
Piano-bass-drums. How often have you heard a WEMU host repeat that instrumental combination? More than you can count. Yet, this trio format remains a source of endless variation and fascination. A prime example of the possibilities is the new CD The Endless Mysteries by pianist George Colligan. You have heard WEMU hosts repeat Colligan's name ...

emusic (Dave Sumner)
Jazz Picks of the Week - Engaging piano trio recording from the trio of pianist Colligan, bassist Larry Grenadier, and drummer Jack DeJohnette. Plenty of modern twists and turns, but nothing that will turn the old-school fans off. While not breaking new ground, familiar territory is explored with an inventive frame of mind, resulting in straight-ah ...

JazzTimes (Travis Rogers, Jr.)
This is one of those albums where you look at the line-up and know that you are in for something extraordinary. George Colligan has been enjoying an increasingly visible profile and continually takes giant leaps forward. This album sees him with Larry Granadier on bass and the incomparable Jack DeJohnette on drums. George?s relationship with DeJ ...

DownBeat (Bobby Reed)
Pianist and educator George Colligan's profile continues to rise. He may not be as well known in some circles as his outstanding trio partners on this project - bassist Larry Grenadier and Colligan's frequent employer, drummer Jack DeJohnette - but he certainly has the chops to hang with them. The Endless Mysteries, Colligan's 24th album as a le ...

New York Times (Nate Chinen)
One of the finer piano trio albums of 2013 - released too late in the year, or on too small a label, to make a dent in the critics' polls - is George Colligan's The Endless Mysteries. It's a program of original compositions, most of them sensible and sturdy. And because it was recorded in a few hours with no rehearsal, it's the product of rough ...

All About Jazz (John Kelman)
While music fans often think of the artists they love as gifted people whose lives are consumed by the pursuit of their art, all-too-often they ignore equally important, if seemingly more mundane, needs: making a living, perhaps having a family...things to which most people aspire. With music sales on the decline, most musicians pay the rent by tou ...

Jazz Society of Oregon (George Fendel)
Portland has always enjoyed a wealth of superb jazz pianists. And what was consistently top tier got even better when George Colligan became part of the music faculty at Portland State University. His new CD, his first for Seattle-based Origin Records, is a trio gig with two masterful colleagues, Larry Grenadier on bass and Jack De Johnette on drum ...

Jazz Reviews (Ben Turner)
George Colligan's been busy gigging, teaching ingrates like myself at Portland State, raising a son, and he had time to record a great trio album with Jack DeJohnette and Larry Grenadier. Man, what am I doing with my life? George is a long-time friend of and collaborator with Jack DeJohnette, touring worldwide and appearing with him at last ye ...

Jazz Weekly (George W. Harris)
Pianist George Colligan has been quietly putting together an impressive catalogue of albums, and this one looks to be his best. It doesn?t hurt that he?s chosen Larry Grenadier/b and Jack DeJohnette/dr to be his stablemates, but the real impressive part here is that these 10 tunes were recorded with a minimum of rehearsal prep. The adroit interplay ...

Critical Jazz (Brent Black)
George Colligan serves up an interesting if not slightly eclectic offering to offer a breath of fresh air to the all too predictable jazz trio format. George Colligan is a lunch pail pianist, he works incredibly hard. A diligent performer, teacher and over all student of music himself, Colligan has had the good fortune to develop a long associa ...

JazzTimes (Jeff Tamarkin)
Not all piano trios are democracies--all too often, the bassist and drummer play second-fiddle roles. That's not the case the The Endless Mysteries, released last fall. Although the pianist and nominal leader, George Colligan, wrote all 10 tracks on this, his 24th album as leader, The Endless Mysteries reflects an equal partnership between himself ...

Louisville Music News (Martin Z. Kasdan Jr.)
Pianist George Colligan's trio mates are probably more recognized than he, but they are not just on board for star value; Jack DeJohnette and Larry Grenadier add to the leader's sometimes challenging work. Colligan's liner notes refer to having played in DeJohnette's band, and the musical empathy is apparent from the beginning; if he hadn't me ... 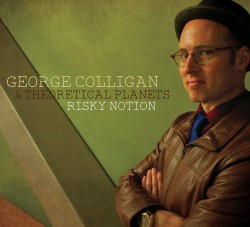