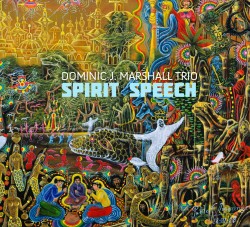 "As bold and adventurous as its predecessor while simultaneously broadening the trio's emotional and dynamic range."

Dominic J Marshall is a young pianist and composer, British born but now based in Amsterdam. He studied classical music for ten years under the tutelage of his father before completing the Jazz Course at Leeds of College of Music. In 2010 he moved to Holland to study for his masters at the Conservatorium Van Amsterdam, graduating in 2012 and deciding to stay in the Netherlands. A regular award winner he has received guidance from such luminaries as Kurt Rosenwinkel, Aaron Parks, Dave Douglas, Gerald Clayton, Dave Douglas and Ambrose Akinmusire and has won the admiration of Jamie Cullum.

In 2011 Marshall self released his first trio recording, The Oneness, featuring bassist Walter Stinson and drummer Ruben Steijn, a mix of original compositions and outside material from such diverse sources as George Shearing, Nick Drake and Thelonious Monk. I've not heard this initial release but I was hugely impressed by the follow up, 2012's Icaros which appeared on the London based F-ire Presents label. This totally self composed set featured Marshall's working trio of the time with Tobias Nijboer on double bass and the Latvian born Kaspars Kurdeko at the drums. The album, favourably reviewed elsewhere on this site, represented a real breakthrough for Marshall, his adventurous compositions enhanced by brilliant all round playing and a pinpoint production. The energy, drive, invention and sophistication of the music compared well with contemporary piano trio giants such as E.S.T., Phronesis, Neil Cowley, Michael Wollny and The Bad Plus.

Still only twenty four Marshall is a huge talent and this latest offering consolidates and builds upon the success of Icaros. Recorded in Germany and mixed in Holland the new album appears on the Seattle based Origin Records but retains many of its predecessor's virtues. Spirit Speech again features an all original programme plus the distinctive artwork of Pablo Amaringo but there has been a change in the drum chair with the excellent Kurdeko replaced by the similarly talented Jamie Peet. The newcomer fits in superbly with a trio whose ethos remains unchanged. Spirit Speech is as bold and adventurous as its predecessor and the spirit of youthful audacity remains undimmed. Marshall cites jazz, classical, hip hop, soul, folk and anything in between as influences and he also has a parallel career as a solo artist in which he explores his love of electronica.

Whereas Icaros, inspired by the medicine songs of the shamans of the Amazonian rain forest, had a vaguely conceptual air, Spirit Speech seems to be more of a collection of tunes. If it has a theme it appears to be that some of the titles are tributes to individuals, beginning with the opening piece "Austin Peralta", Marshall's homage to the young American pianist and composer who tragically died in 2012 aged just twenty two. A sombre but beautiful opening passage is suitably reverential but the piece later exhibits the kind of bustling, youthful energy that was also Peralta's trademark. New drummer Jamie Peet reveals himself to be an excellent replacement for the departed Kurdeko with hip hop style grooves that help to signify that Peralta, like Marshall, was something of a polymath, both musical and otherwise.

"Book Of Machines" also bristles with energy and invention, with a high degree of interaction between the members of the trio. Marshall's music is frequently complex and full of twists and turns and startling dynamic contrasts and as a soloist he is just bursting with ideas. The occasional groans and gasps of Jarrett like approbation that pepper his solo here offer evidence of the obvious delight he takes in his own playing. Marshall is a player with a febrile imagination and with the technical ability to back it up, and in Nijsboer and Peet he has colleagues who are more than capable of responding to the challenges that their leader routinely throws at them.

"Unflinchingly" reveals a gentler side of the trio, a lyrical ballad featuring limpid piano and brushed drums that sees the trio broadening their emotional and dynamic range and expanding their horizons. The piece is akin to one of the Jarrett trio's more tender moments and includes a short feature for bassist Tobias Nijboer.

The following "Srividya's Cells" begins in similar territory with its lyrical opening passage before metamorphosing into something more groove driven while retaining a strong sense of melody. Peet's neatly energetic cymbal work is the perfect foil to Marshall's expansive soloing.

The reflective mood is briefly sustained by the passage of solo piano that opens the more hard driving "Tiwanaku" which punctuates its numerous muscular passages, fuelled by Peet's solid back beats, with brief snatches of freer playing. Periodically Marshall deploys rapid fire repeated motifs in the style of Neil Cowley. The energy levels and overall style are maintained for the following "Sleepwalking", another piece that combines the trio's youthful enthusiasm with an impressive level of technical expertise.

I'm assuming that the tune entitled "Bud" is a tribute to the late, great Bud Powell, but of course I could be wrong, especially given Marshall's youth. Certainly there's more of an "orthodox" jazz feel about the extended solo piano introduction. The feel is more contemporary after the introduction of bass and drums with Marshall soloing effusively above busy, odd meter grooves but the feeling of being "in the tradition" is always there.

"Justin" is, presumably, another tribute but this time I'm not going to speculate about the identity of the subject. The atmospheric introduction teams Marshall's piano with grainy arco bass and eerie cymbal scrapes and shimmers before the mood shifts abruptly as a punchy piano motif suddenly erupts as if from nowhere. The rest of the track plays out in the punchy, hard driving style glimpsed elsewhere on the album with Marshall swarming all over the keyboard, occasionally throwing in elements of a joyful dissonance among the killer riffs and grooves

As the title might suggest "I'm Sorry" is a more reflective performance - and perhaps a highly personal one, played as it is entirely on solo piano.

Enigmatic titles are something of a Marshall trademark. "N + This Very Duo" is in fact a typically interactive trio performance that largely maintains the lyrical mood established by the previous track. Nijboer is featured extensively with a deftly expressive bass solo and Peet's brush work is full of delightful small details. The closing stages see the trio varying the mood with a lightly swinging groove.

Peet's drums introduce the closing track, "Enter The Void" and he also features in the tune's closing stages. Elsewhere the trio gradually ease up through the gears via Marshall's inventive and expansive soloing to climax the piece and the album with some typically energetic and chunky quick fire motifs.

Despite the change of personnel Spirit Speech exhibits the same virtues that made Icaros such a success while simultaneously broadening the trio's emotional and dynamic range. Marshall continues to be a talent to watch out for. Let's hope he's able to the bring the trio back to the UK sometime soon, this is a group I'd very much like to see performing live.

Other Reviews of
"Spirit Speech":

The Jazz Breakfast by Peter Bacon

All About Jazz by Bruce Lindsay