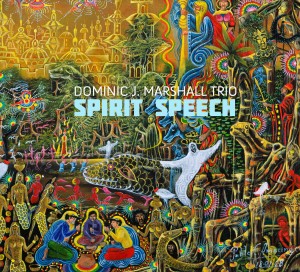 Born and raised in the U.K. and based in Amsterdam, pianist/composer Dominic J Marshall proved with his first two recordings to be a prodigious and precocious talent, and now at 24, one well worth keeping an eye on. On Spirit Speech, Marshall's trio, with bassist Tobias Nijboer and drummer Jamie Peet, evades categorization, surging enigmatically through jazz, classical, hip-hop, soul, folk and everything in between, into a realm of expression that is uncompromisingly their own. "He brings together a great heritage of the past, but also something very fresh and new, all within the confines of a simple acoustic piano trio." - Jamie Cullum, BBC.

Bebop Spoken Here (UK) (Lance Liddle)
Gestating in the Womb. a blind future which would destroy us. a precocious potentiality to elevate us toward the golden city walls of Ancient Egyptian demigods. but it is the vibrations coming from outside. celestial sound waves impinging on that foetal conciousness that will make or break us. and before we know if we want to be made or brok ...

London Jazz News (Mike Collins)
This follow-up to his 2012 release Icaros finds 24-year-old pianist Dominic J Marshall in great form and still exploring the potential of the acoustic piano trio. He has developed a distinctive voice and it earned his trio a slot on the "Introducing" stage at last summer's Manchester Jazz Festival, attracting admiring comments from Jamie Cullum. ...

All About Jazz (Bruce Lindsay)
Dominic J Marshall has clearly absorbed a lot of influences in his 24 years. The pianist, born in Scotland and now resident in Amsterdam, brings many of them to Spirit Speech, the third album by his trio. Hip-hop, jazz, classical, folk: it's a disparate bunch and while it isn't exactly chalk and cheese there's still a risk that mixing them all t ...

All About Jazz (C. Michael Bailey)
Did you hear the one about the English pianist, living in Amsterdam, blending a cornucopia of popular music styles under the banner of jazz. Well, that would be Dominic J Marshall, leading his trio of bassist Tobias Nijboer and drummer Jamie Peet through his sequel to 2012's Icaros (F-ire Records), Spirit Speech. Nijboer is a holdover from Icaros, ...

Cultuurpodium - Netherlands (Serge Julien)
Speech Spirit is the third album by pianist Dominic J. Marshall. The 25-year-old Scot gets one after another accolade from experts and enthusiasts. And for good reason, as his new album presents the musician in an unprecedented and artistic level of play that is full of influences. Dominic J. Marshall studied classical piano for ten years under ...

The Jazz Mann (Ian Mann)
"As bold and adventurous as its predecessor while simultaneously broadening the trio's emotional and dynamic range." Dominic J Marshall is a young pianist and composer, British born but now based in Amsterdam. He studied classical music for ten years under the tutelage of his father before completing the Jazz Course at Leeds of College of Mus ...

JazzFlits - Holland (Hessel Fluitman)
The label Origin from Seattle has its own sound. In many Origin recordings appear a slithering calm, intelligently played jazz. Spirit Speech of the trio of pianist Dominic J. Marshall seems at first hearing a typical Origin album. Yet Marshall is too much of a stubborn European to a preferred body to squeeze. His game has more emotion than you exp ...

HiFi - Netherlands (Luc van Gaans)
Jazz pianists are like red wine, they should mature to taste mature and fuller. But Dominic J Marshall proves that rule does not always apply. Living in the Netherlands, the pianist came from Scotland in 2012, yielding a promising second CD with Icaros. Now he again makes a particularly strong CD, and while he is a young 24 years, at that young age ...

Jazz Weekly (George W. Harris)
Pianist Dominic J. Marshall's star keeps rising on this session of originals with Tobias Nijboer/bass and Jamie Peet/drums. He's got a thoughtful touch that is able to be both swinging and romantic. His compositions are clever, sophisticated and accessible, ranging from the driving "Book of Machines" to the elegant ballad "Unflinchingly." A g ...

The Jazz Breakfast (Peter Bacon)
Remember when the references you most commonly picked up from a piano trio were to the oblique harmonies and subtle rhythms of Bill Evans. Now it’s the hip-hop groove and the sliding Robert Glasper phrases that most often stand out. Of course there is nothing wrong with either form of sincere flattery and I haven’t heard many pianists not us ...