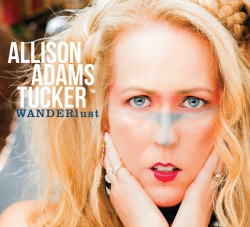 Allison Adams Tucker has assembled a cache of great songs, as well as a roster of stellar musicians, to create a truly exceptional recording. Her latest release, WANDERlust, fulfills all the requirements of a CD that I'll play again and again: verve, liveliness, and variety.

Tucker is a marvelous singer. A soprano, her voice is light and clear, yet she has a great deal of strength and power. Her intonation is exemplary. It is a delight to hear a naturally talented individual who has obviously worked hard to develop her craft.

With songs from all over the globe, WANDERlust takes as its premise the seduction of travel and the experience of seeing the larger world. Tucker employs her love of language and her training as a linguist, singing in French, Italian, and even Japanese. Though she gathered songs from many different countries, a good number of them, such as "Waters of March" and "Under Paris Skies," are familiar standards. Including the Japanese "Takeda Lullaby" and Bjork's "Wanderlust" adds to the variety of the disk.

Often overlooked by the public, and even folks who make their living in music, is the quality of a singer's diction. The greats of the jazz tradition—Sinatra, Billie Holiday, among the best examples—knew that pronouncing the words well was an essential component to their performances. Indeed, for decades Sinatra recordings had been a staple of English as a Second Language classrooms, because the crooner took such care with his pronunciation. It is most apparent when she sings in English, but I particularly appreciated how well Tucker sings the lyrics of the songs in other languages.

Not merely being serviceable in support of a vocalist, the arrangements are interesting in their own right. Note-worthy are the angular introduction to "When in Rome," the spare introduction to "A Thousand Years," and the Sugar Cubistic take on the title tune "Wanderlust." Recorded and mixed by Chris Allen at the famous Sear Sound Studio in New York, where Steely Dan, Wynton Marsalis, and Paul McCartney have recorded, the instruments have a great deal of clarity, giving the disk a very "live" sound. CDs are designed to have an hour or more of music on them. So fill 'em up! WANDERlust contains more than 54 minutes of music, earning it five and a half bonus points.

The musicians are all tops. I would list them all here as well as their instruments, but you'd probably skip over this part of the review. Believe me, they are all great. I liked how the band really kicks out the jams, with a dynamite solo by saxophonist Chris Potter, on the song "Wanderlust."

San Diego is lucky to have such a talented performer as Allison Adams Tucker. I'm eager to hear her perform soon, and, as I said before, I know that I'll be putting Wanderlust in my disk player again and again. With no hesitation, I take great pleasure in saying that Wanderlust receives my highest endorsement.

Other Reviews of
"WANDERlust":