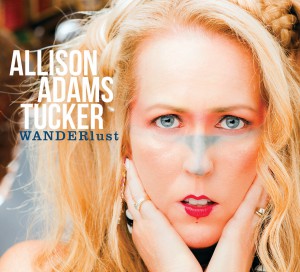 ...lustrous in any language. A vocalist who clarifies every note within a hair's breath.
— The Examiner

WANDERlust journeys into new territory with jazz inspired songs that span countries and genres in six languages, from Cole Porter to Astor Piazzolla, Michel Legrand to Björk, Violetta Parra to Ennio Morricone. The San Diego­based vocalist's love for languages and world cultures has been life­long, having lived in Japan and Spain along with traveling widely and often, and this "wanderlust" is evident in the music she chooses and the talent she surrounds herself with. Produced by Matt Pierson and recorded in New York City, she's joined by drummer Antonio Sanchez, guitarist Romero Lubambo, & percussionist Rogério Boccato, along with saxophonist Chris Potter, pianist Josh Nelson and more.

Musicalmemoirs\' Blog (Dee Dee McNeil)
This vocalist is quite extraordinary. She sings well in English, French, Portuguese, Italian, Spanish and Japanese on this groundbreaking recording. Yes, six languages and all sung with emotion, passion and sounding very authentic to this listener's ear. The singer and her longtime pianist, Josh Nelson, flew to New York and recorded with an Interna ...

All About Jazz (Dan Bilawsky)
Many modern-day jazz vocalists have been known to touchdown in a few different locales over the course of an album, but few to none get their passports stamped in as many places as Allison Adams Tucker does on the aptly named WANDERlust. Tucker brings her multilingual brilliance and cultural savvy to the fore during this expertly planned travelogue ...

AXS (Carol Banks Weber)
Two years ago, Allison Adams Tucker made April In Paris, showcasing a gift for languages and exotic musical styles found all over the world. She recorded her June 3, 2014, sophomore release in Paris with arrangements by Jovino Santos Neto, Kamau Kenyatta, Emmanuel Massarotti, and Danny Green. On Aug. 19, she will continue the lively musical trav ...

Midwest Record (Chris Spector)
Some singers just have a special knack for being interpreters, and interpret she does with a wide range of material from various, disparate sources. Producer Matt Pierson doesn't seem to be missing his major label days as he assembles a killer crew of pros all single mindedly purposed to bringing out the best in Tucker. With her purring, sultry vo ...

San Diego Troubadour (Paul Hormick)
Allison Adams Tucker has assembled a cache of great songs, as well as a roster of stellar musicians, to create a truly exceptional recording. Her latest release, WANDERlust, fulfills all the requirements of a CD that I'll play again and again: verve, liveliness, and variety. Tucker is a marvelous singer. A soprano, her voice is light and clear, ...

San Diego Union-Tribune (George Varga)
San Diego music mainstay Allison Adams Tucker isn't kidding when she describes herself as a "world jazz singer." As her third and newest album, "WANDERlust," handily reaffirms, she can sing with equal skill and poise in English, Spanish, French, Portuguese, Italian and Japanese. Recorded in New York, the alluring "WANDERlust" teams her with such ...

Drumhead Magazine (Editor)
Allison Adams Tucker offers a travel memoir in song on her third album, WANDERlust. Tucker sings in isx languages on the album, which vividly captures the yearning of the inveterate travel for the romance and adventure of experiencing far-flung corners of the globe. Recorded in New York City under the direction of award-winning producer Matt Pierso ...

Amazon (Ricky Kej)
Allison Adams Tucker's latest album is a brilliantly sung and produced set of songs that go straight to the heart. Starting with "When in Rome" is a song drenched in the romance of jazz and the purity of the vocals heightens the magic ten-fold :-) . Next up, "Vuelvo Al Sur" is a poetic song, the sensuality of the words, the melody and the vocals ar ...

Downbeat (Scott Yanow)
**** A powerful singer with an attractive voice, Allison Adams Tucker has always been interested in different languages and cultures. The San Diego-based vocalist has visited more than 15 countries in her life thus far, and she has clearly learned a great deal from the experiences. On WANDERlust, her third album, she celebrates not only the music ...

London Jazz News (John Watson)
The international scene is currently blessed with a huge number of exceptionally talented female singers. There are so many strikingly individual voices among them, ranging from the deep, dark chocolate timbre of Patricia Barber to the almost fly-away high range of the brilliant Youn Sun Nah, and all shades of tonal colours in between. San Diego ...

JazzTimes (Christopher Loudon)
Californian Allison Adams Tucker is far from the first artist to parlay an album-length playlist into an around-the-world travelogue. But she comes by the concept more honestly than most, having circled the globe multiple times, performing everywhere from Tuscany to Tokyo, all the while developing credible fluency in six languages. Nor has her musi ...