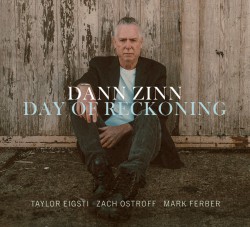 Throughout the album Day of Reckoning, the fifth from tenorist Dann Zinn, creative freedom emerges with straightforward structural discipline within a post-bop realm that oftentimes refers to the sonic worlds of Michael Brecker, Sonny Stitt, Jerry Bergonzi, and Phil Woods. In the company of technically developed musicians such as pianist Taylor Eigsti, a frequent collaborator, bassist Zach Ostroff, and drummer Mark Ferber, Zinn blends familiar straight-ahead swinging motion with the musical individuality patented in the pulsating vim and vigor of his blows.

The disc comprises 10 tracks, nine originals written for these specific musicians and an interpretation of the 1934 ballad "Blame It On My Youth", authored by Oscar Levant and Edward Heyman. The latter tune, together with "Infinity Road", denotes the quietest moments of an energetic album that opens with the exhilarating modal feel and surging impetus of the title track. Zinn's frenetic elocution takes the form of a riot-like outburst, with the rhythm section securing the unstoppable swinging drive that only ceases to accommodate Ostroff's proclamation. The swing is resumed when Eigsti displays an impeccably coordinated statement.

The second track, "Longing", is a bit more restrained than its predecessor but still passionate and stimulating. It kicks off with serene piano, which, moments later, combines with regularly spaced arco bass reactions and decorous percussive elegance. This moderate inception is jazzed up gradually as the improvisations move ahead, culminating with Zinn exchanging choruses with Eigsti. Their musical chemistry is noticeable.

The volcanic force of the first two selections somewhat mitigates on the following tracks. Yet, one can find Keith Jarrett's influence appearing on both "Family Reunion", a post-bop tune tempered by Latin grace, and "9", which recalls the work of the cited pianist with Jan Garbarek. "Continental Drive", introduced with an effusive saxophone extemporization solely backed by drums, is a crossover number with detectable folk lines, differing, however, from the ancestral-like flute celebrations offered on "The Journey Home".

"Time's Up" closes out the album, searching for something more than a groove through several rhythm/tempo variations. Zinn has reasons to be proud of his music, which was specifically written for the quartet he leads.

Other Reviews of
"Day of Reckoning":