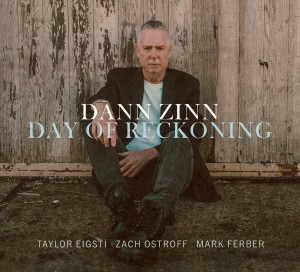 For his fifth recording as a leader, San Francisco Bay-Area saxophonist Dann Zinn presents his stellar quartet in a performance of nine new original compositions along with a moving version of the classic ballad, "Blame It On My Youth." With Taylor Eigsti on piano, bassist Zach Ostroff and Mark Ferber on drums, Zinn's playing is energetic, virtuosic, and passionate. Recorded in the final weeks of the legendary Fantasy Studios in Berkeley, CA, the band captured the sounds and clarity of the studio along with the passionate energy the group brings to a live gig, creating a listening experience that "exemplifies Zinn's gift for marrying eminently memorable themes to entrancing rhythms." "Dann Zinn is a game changer who is taking jazz in new directions." - Stanford Jazz.

Reviews of Day of Reckoning

Midwest Record (Chris Spector)
Recorded as a farewell to Fantasy Studios, sax man Zinn and his pals recorded pretty much live off the floor capturing their vibes as well as the sounds that passed through those doors (even if some of them were recorded by Van Gelder on the other side of the country). These originals are all about energy and heart, both of which are delivered by ...

Downbeat (Anthony Dean-Harris)
Day Of Reckoning is Dan Zinn's fifth album as a leader and lead it he certainly does. The reedist is very much at the forefront of this music, the band patter for his play. There's a buoyancy to the music here, floating along with ease, the players seemingly having a good time. Most performances, though, are just warm, never scalding hot. "Conti ...

Jazz Trail (FILIPE FREITAS)
Throughout the album Day of Reckoning, the fifth from tenorist Dann Zinn, creative freedom emerges with straightforward structural discipline within a post-bop realm that oftentimes refers to the sonic worlds of Michael Brecker, Sonny Stitt, Jerry Bergonzi, and Phil Woods. In the company of technically developed musicians such as pianist Taylor Eig ...