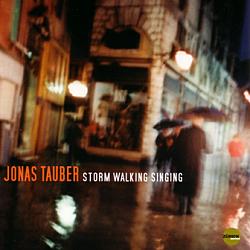 Recorded before a live audience at Cafe 26 in Switzerland, Storm Walking Singing comprises mainly original improvised solo pieces performed by bassist Jonas Tauber. Such is the level of intensity and conviction of Tauber's playing that one has to remind oneself that this is just one man and his double bass. His ambitious approach to the instrument compounds the impression that there is an ensemble rather than a soloist at play.

Particularily noteworthy are his talents as an impressionist, conjuring up images of a waterfall, creeks, stones and ponds. Elsewhere he brilliantly creates the sound of a three part- chorus by repeatedly bowing the strings to create overtones. Indeed, Tauber's fascination with the world of overtones, hypertones, over-the-bridge scrapings, unusual resonances and the like leads him to make impressive forays into the world of acoustics and bass technique. This, along with the extreme minimalism of his musical ideas, marks this album out as a work of considerable originality.

That said, some listeners may be frustrated by the somewhat nomadic tonal centers which refuse to resolve and seem - to the Western ear at least - to have no musical reasoning. However, Tauber's commitment to and belief in each and every note he plays lends a conviction to the music that is very compelling.

This is an album to inspire listeners to approach their instrument in a completely new way.