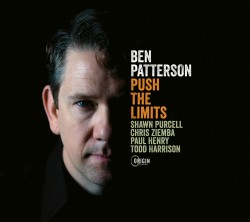 It took no more than a quick Google search to find that every member of trombonist Ben Patterson's quintet is (or was) also a member of the U.S. Air Force's flagship jazz ensemble, the Airmen of Note. On Push the Limits, Patterson challenges his fellow airmen to cruise through ten of his elaborate compositions and arrangements, a mission they carry out with what seems to be relative ease. In other words, the technical excellence of the group is undeniable.

As for Push the Limits, what we have, although it surely wasn't planned that way, is essentially a tale of two albums, divided roughly in half. Patterson is a talented writer who for reasons unknown sets sail on an unusually tenuous footing, see- sawing through the opening five numbers—the highs barely outpacing the lows—before landing in a more accessible groove on "Suits Me Fine," a loping blues wherein everyone sounds calm, cool and at ease. "Almost There," which follows, is a rhythmically solid essay that benefits from a handsome solo by Patterson and typically splendid support from the rhythm section before guitarist Shawn Purcell, whose solo suits the chart but may land on some ears as disconcerting, weighs in.

Thanks by and large to Patterson's auspicious about-face, the second half of the album is far more pleasing than the first, as "Alone Time" flows neatly along on the wings of bright statements by Patterson and pianist Chris Ziemba, and there's a more agreeable solo by Purcell (with Ziemba dazzling on Fender Rhodes) on the lively "Road Trip," whose terminus is assuredly south of the border. The finale, "Scoish," opens on a comparably even keel before Purcell rocks the boat with another slightly overcooked solo. Which is unfortunate, as Purcell is technically flawless, as are the quintet as a unit (the other members are bassist Paul Henry and drummer Todd Harrison ).

The musicianship on Push the Limits is exemplary, as one would expect from Airmen of Note, the music somewhat less so early in the game but on balance far more agreeable than displeasing, and for the most part superb on Tracks 6-10, wherein Patterson and the ensemble basically lock in their tasteful symmetry. A passing grade within a trace of landing even higher.

Other Reviews of
"Push the Limits":