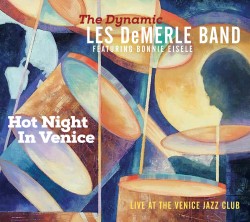 Recorded at the Venice Jazz Club in Italy back in 2014, this album is a swinging affair with drummer, vocalist and leader Les DeMerle leading a trio with Johannes Bjerregaard/p and Chris Luard snapping through some standards and occasionally joined by the big band era influence vocalist Bonnie Eisele on an anthological gig of American tunes.

In the trio format, Bjerregard taps into his inner Bobby Timmons for a gospel driven "Down By The Riverside" while he skates to DeMerle's brushes on"Perdido" before the team sets snappy and crisp on "Manteca". DeMerle is hip and jivey as he sings on "All That Jazz" and forms a nice duet with Eisele on a shuffling "All Right, OK, You Win" and nifty cool "Comin' Home Baby". On her own, Eisele slinks t h rough "Frim Fram Sauce" and saunters to "Woe Is Me". The whole set is upbeat and serves a great atmosphere of partying hearty.

Other Reviews of
"Hot Night In Venice: Live at The Venice Jazz Club":