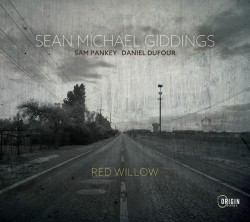 Along with piano, leader Sean Michael Giddings plays harmonium, whammy clav as well as some orchestral programming with his team of Sam Pankey/b and Daniel Dufour/dr. The orchestrations are rich and graceful, as on the waltzing "Opening Scene" (featuring Pankey) and the pretty and poetic "Sonata". Some New Orleans pulses have Giddings hitting the chords hard on "White Claw" and he gives a rich romantic piano intro to "Agafia". The leader shows a soft touch on the lovely "Unfinished Moon" and dark shades of Monk, guided by Dufour's sticks on "Vienna". Giddings bops nicely on a duet with the bassist on "Red Willow" cascades with his team on "Bonnie". Modern arrangements of musical furniture.

Other Reviews of
"Red Willow":