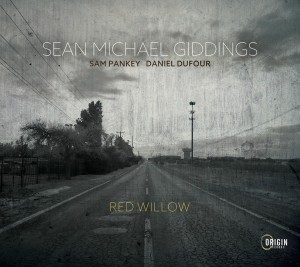 Austin-based pianist, composer, singer and producer Sean Michael Giddings has had a wide-ranging career since moving through the University of North Texas 1:00 Lab Band a decade ago. Tours with pop icon Christopher Cross, country star Pat Green, or virtuoso guitarist Eric Johnson offer a deep musical well to draw from when expressing his own songwriting voice or with this, his debut piano trio album. His compositions and musical touch evoke major influences such as Vince Guaraldi, Bill Evans, Keith Jarrett and Brad Mehldau, while the central Texas setting of his home recording studio—with the Baldwin baby grand that's been with him since childhood—add a patient, comfortable embrace to the session. With the calypso-esque "Sebastian," or the '70s Jarrett-influenced "First Cup," Giddings's longtime collaborators bassist Sam Pankey and drummer Daniel Dufour propel and support, while the moving ballad, "In the Light of the Unfinished Moon," personifies the sound of deep musical connection.

All About Jazz (Dan McClenaghan)
Keyboardist Sean Michael Giddings cites pianist Vince Guaraldi, the composer of the Charles Schultz Peanuts cartoon soundtracks (among other things), as one of his influences. Guaraldi is joined in that "sphere of influence" club by the usual suspects—Brad Mehldau, Bill Evans, Keith Jarrett—who all play a part in Giddings' sound. But Guaraldi's ...

Midwest Record (Chris Spector)
A piano trio led by a neo hippie that doesn't look like he would make originals that sounds like Charlie Brown music. If his opening Charlie Brown riffs don't grab you (and they will), there's plenty more stuff here that will. Spending the last decade as sidekick to a host of biggies, the pandemic forced him to realize it's time to shine his own ...

Jazz Weekly (George W Harris)
Along with piano, leader Sean Michael Giddings plays harmonium, whammy clav as well as some orchestral programming with his team of Sam Pankey/b and Daniel Dufour/dr. The orchestrations are rich and graceful, as on the waltzing “Opening Scene” (featuring Pankey) and the pretty and poetic “Sonata”. Some New Orleans pulses have Giddings hitti ...