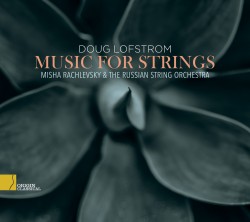 The earliest material on this thoroughly appealing collection of classical material by Chicago composer Doug Lofstrom dates back to 1971, yet Music for Strings sounds as fresh as the day it was born. How the Russian String Orchestra and its conductor founder Misha Rachlevsky came to perform the four Lofstrom works on the release isn't clarified; regardless, both listeners and composer are fortunate they did. The committed renderings by the musicians flatter the latter, and the former have been granted the pleasure of listening to an almost hour-long collection of absorbing music.

Loftsrom's career has ranged as widely as the music he creates. He's been composer-in-residence for the Metropolis Symphony Orchestra and has taught music at Columbia College since 1986. He's also been involved in a number of ensembles, among them the jazz-and-spoken word outfit the Last Word Quintet and The New Quartet, which performs his music and arrangements of modern classics, world music, and jazz pieces. He's issued four CDs with the acoustic quartet Trillium and had a set of concertinos released by Origin Classical in 2012.

Recorded in Moscow in December 2018 and February 2019, the material is brought to vivid life by the Russian String Orchestra, here comprising nine violins, four violas, three cellos, two double bassists, and harpist Olga Logacheva. Though the opening Music for Strings was originally recorded in 1984 by a string quintet and harp and given its orchestral premiere a decade later by the Metropolis Symphony Orchestra, it appears with the three other pieces for the first time on this Origin Classical release. The first of the work's three movements instantly enraptures with a graceful motive and sweeping uplift. The romantic second movement proves as absorbing, especially when harp embroiders the strings' outpourings and reinforces the music's lilting rhythm, while the third charms with bright, dance-like gestures.

Also in three movements, the Concerto for String Orchestra begins plaintively, with a brooding undercurrent imbuing the material with a rather Bartókian character. While the opening part isn't necessarily grief-stricken, it's definitely sombre and more than a little haunting. The central movement's livelier, with this time macabre figures hinting at a Shostakovich influence. The tone shifts for August Diary when its first movement begins with Copland-like flourishes and Logacheva again ornamenting the strings. Accompanied by string plucks, her harp takes the lead for the pastoral folk-tinged second and figures prominently in the elegiac third part too. When the recording ends with 2008's Midsummer Passage, it comes full circle with a poignant and quietly triumphant piece that feels melodically connected to the opening work's first part.

Musicality and melody are abundant in these settings, and Loftsrom generally eschews dissonance for harmonious writing that's accessible but not pandering. For someone coming to his music for the first time, Music for Strings offers a terrific entry-point.

Other Reviews of
"Music for Strings":