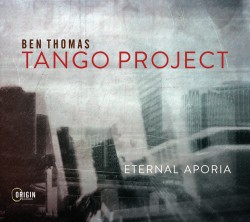 Thomas, best known in Seattle, WA, as one of the area's foremost jazz vibraphonists, fell in love with the tango nearly two decades ago. He studied the music intensively and learned to play the bandoneon, one of the dance's instruments of choice. He composed every number on Eternal Aporia, two of which ("Flowers of Rage," "We Were Never Perfect") run for less than a minute but are no less charming than the other ten. There seems to have been some occasional overdubbing, unless Thomas has learned to play the bandoneon with one hand and the vibraphone with the other.

For those who may be thinking "repetitive," it should be noted that there are almost twenty varieties of the tango, more than enough for Thomas and his colleagues to canvass for shading and variety. Some of the numbers here sound much like the tangos one may be accustomed to hearing in dance halls or on radio, while others do not—but each one bears the unmistakable ethos and ambience of the tango, from the opening "Tangent 7" through "Something Ventured," which clears the dance floor in elegant fashion.

"Tangent 7" (a "Tangent 5" appears later) is the first of two selections on which the sextet performs; the other is "The Space Between." While the presence of violin, cello and piano does make a sonic difference, Thomas and the trio fare quite well elsewhere, enlivening the tango in their own small(er) way. As far as jazz is concerned, the tango does bear some resemblance to the genre, but those who are seeking inspired improvisation—indeed, improvisation of any kind—should look elsewhere. This is dance music, and should be noted as such: admirable in its own way but rather far removed from jazz in the usual sense of the word. That said, everyone here is a first-class musician, and Eternal Aporia is easily recommended to those whose hunger for the dance overrides the pleasure of listening for its own sake.

Other Reviews of
"Eternal Aporia":