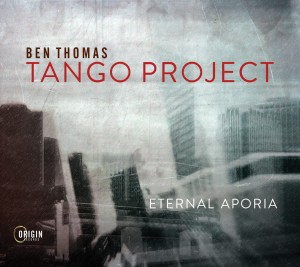 Coming from a rich career as a jazz vibraphonist and composer, Ben Thomas found himself enthralled by the sounds and history of tango music, first as a dancer and then as an avid student of the bandoneon. Through his fifteen-year journey, Thomas took trips to Buenos Aires to hear & study with the masters, eventually finding his own voice in the music and performing widely. With Eternal Aporia, Thomas presents the debut recording of his Tango trio with clarinetist Eric Likkel and bassist Steve Schermer, exploring tango through its encounters with new times and new influences. Following the lead of some of the leaders of the current scene in Buenos Aires, such as Diego Schissi and Exequiel Mantega, Thomas builds his intricate pieces combining rhythmic intensity with lush harmonies, whimsy, and an emphasis on storytelling.

"Ben is a great composer, and an energetic performer who knows how deep music can go." - Jovino Santos Neto

All compositions by Ben Thomas, published by Malletman Music

All About Jazz (Jack Bowers)
They say it takes two to tango. On Ben Thomas' new album, Eternal Aporia ("uncertainty; doubt"), it takes at least three, and sometimes half a dozen. That's not a bad thing, as Thomas' splendid core trio is fleshed out on three numbers by cellist Gretchen Vanover and on two others by Vanover, violinist Brandon Vance and pianist Jonathan Greer, maki ...

Jazz Weekly (George W. Harris)
I'm not sure where the internal contradiction is in Ben Thomas' album, where he plays bandoneon, vibes and percussion with Eric Likkel/c-bcl, Steve Schermer/b Gretchen Yanover/cel, Brandon Vance/v and Jonathan Geer/p. The music seems to make perfect sense, bringing together right Argentine sounds with an occasional klezmer feel. The strings and pia ...

Jazz'halo (Belgium) (Georges Tonla Briquet)
Multi-instrumentalist Ben Thomas in turn ventures into the "tango nuevo" and this only with his own compositions. Jazz and tango or also the "tango nuevo" without a composition by Piazzolla on the set list? Ben Thomas does it on this 'Eternal Aporia'. It's a step-by-step story. He first made a name for himself as a vibraphonist and composer befo ...

Take Effect (Tom Haugen)
The multi-instrumentalist and composer Ben Thomas has a lengthy and esteemed career in jazz sounds, and here he offers us another interest of his, tango music, where Eric Likkel, Steve Schermer, Gretchen Yanover, Brandon Vance and Jonathan Geer accompany him. "Tangent 7" opens the listen with playful Thomas' vibraphone alongside Yanover's warm ...

Jazz'n'More (Switzerland) ( Angela Ballhorn)
Sometimes life takes strange paths with you, Ben Thomas would not have thought 15 years ago that his passion for tango dancing and the resulting interest in music would lead him to this tango project. Thomas lays down melodies and rhythms in his compositions on both the vibraphone and the bandoneon, his melodic companions on the violin and clarinet ...

All About Jazz (Jane Kozhevnikova)
For some people, tango means the dance with a stereotypical red rose between the teeth. For Ben Thomas, a percussionist and bandoneonist from Seattle, tango is much more than that: it has been an important part of his life for at least fifteen years before the 2022 release of Eternal Aporia. The album includes twelve of his original compositions mi ...

Earshot Jazz (ANDREW LUTHRINGER)
Ben Thomas is an incredibly accomplished virtuoso on the vibes; an improviser and composer of deep expressiveness, wit, and crisply focused execution. Throughout four previous solo albums on the venerable Origin Records label (and as an indispensable member of Jovino Santos Neto's Quinteto), Thomas has explored an expansive range of challenging and ...