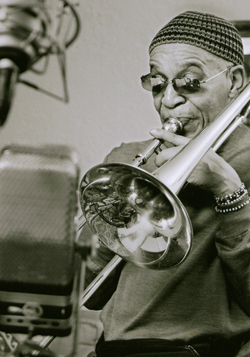 He is a consumate professional and true trombone giant.
Jazz Player Magazine

Benny Powell (March 1st, 1930 - June 26th, 2010) was a journeyman trombonist whose bold sound bridged bebop and swing. His work employed the vocal color of great swing trombonists and the technical fluidity of bop practitioners. Powell played both tenor trombone and the bigger-bored bass trombone broadening the colors he brought to an ensemble. Known almost exclusively as a sideman, he's made valuable contributions to several notable bands, ranging from the rocking swing of Lionel Hampton to the roots-informed avant-garde of John Carter. A native of New Orleans, Powell started performing professionally at 14. By age 18, he had joined Lionel Hampton, and three years later he left to join the Count Basie Orchestra just as Basie was re-establishing his band as one of the benchmarks of the field. Powell's horn plays the bridge on Basie's biggest hit "April in Paris." He stayed with Basie through 1963, making small band sessions with a number of leaders, most often fellow members of Basie's orchestra. From 1963, he first worked as a session man in New York, notably with the band for the Merv Griffin Show. He moved to California with the show and continued to be in demand with rehearsal big bands in which studio players got a chance to exercise their jazz chops. Prominent among these was the Thad Jones-Mel Lewis Jazz Orchestra. Powell recorded one session with the group taking the highly charged and characteristic solo on "Fingers." That swaggering solo style combined with a studio player's dependability landed him stints with Abdullah Ibrahim, John Carter contributing to all five recordings that comprise Roots and Folklore: Episodes in the Development of American Folk Music, and Randy Weston. Weston's big bands proved especially fitting showcases for the range of Powell's work. In 1991, Powell recorded his second session as a leader under his own name. The session featured a number of his own compositions which draw on a variety of styles and prove apt vehicles for his expressive horn. Powell has also been active in teaching young people about jazz and the roots of African-American music, including work with the Jazzmobile in New York City. ~ adapted from David Dupont, All Music Guide

Be sure to visit Benny Powell's discography page, compiled by Noal Cohen.

Here's an interview with Benny, taken from the Online Trombone Journal, and another by Bob Bernotas, here.

This is an interview with Benny from Jazz Player magazine.

Check out the feature story about Benny Powell at Allaboutjazz.com.