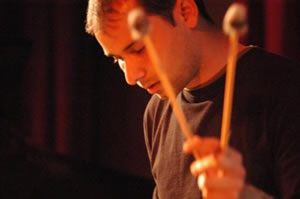 It was in this period when he became more interested in jazz and improvised music. In 1997 he co-founded, with Slovak piano player Michal Vanoucek the band AsGuests. During his study in Bratislava in 1995 Miro became a member of the percussion section of the Slovak Radio Orchestra, where he played until 2000. He also was a member of the orchestra for the German version of the musical "The King and I". His interest in jazz grew and he decided to study with Frits Landesbergen, professor of jazz vibraphone in the Royal Conservatory of The Hague, The Netherlands.

Miro was admitted in 2000 and as a promising student he received for three consecutive years a scholarship from the Schuurman-Scimmel van Ouderen Foundation. In 2002 and 2003 he attended several private lessons with a legendary vibraphone player Mike Mainieri in New York. At the Royal Conservatory he attained the Bachelor of Music degree in 2004 and the Master of Music degree in 2006 with a special distinction.

Miro was touring all over Europe, played at jazz festivals in The Netherlands, Belgium, Slovakia, Czech republic, Spain, France, several times performed at The North Sea Jazz Festival and in November 2005 he played in Carnegie Hall in New York. With the band "AsGuests" he won the "Pim Jacobs Muziek Prijs 2004" and "The Dutch Jazz Competition 2004." The band won a tour around all major venues in The Netherlands and recorded the debut CD "Enter As Guests", released in 2005. In 2008 a live recording of a concert was released on the DVD, titled "As Guests live in Belgium". The same year was Miro selected to be a member of the European Colours Jazz Orchestra with residence in Italy. Besides AsGuests he is also performing with the band 4in1, New European Jazz Collective, The Hague Ethospheric Orchestra. He collaborated with many artists such as Kenny Wheeler, John Ruocco, Rosario Giulliani, Massimo Morganti, Deborah J.Carter.