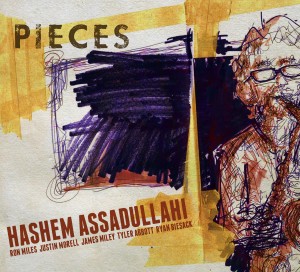 With eleven new works, highlighting the dramatic chemistry and rapport within his sextet, New York-based saxophonist and composer Hashem Assadullahi presents his debut recording for OA2 Records. Inspired by events, people and passions, the compositions are brought to life through the ensemble's strength of collective improvisation and their shared eclectic musical aesthetic. While drawing on a wide array of inspirations, including jazz, classical, pop, and movie soundtracks, each piece focuses on melody and mood, from introspective to lighthearted fun.

Oregon Jazz Scene (Tim Willcox)
Saxophonist and composer Assadullahi strikes gold with this rich recording featuring some of Oregon’s finest talent along with Denver trumpet virtuoso Ron Miles. Though Assadullahi relocated to New York after leaving the University of Oregon several years ago, his ties to this region remain strong with frequent visits, gigs, and collaborations. Gui ...

All About Jazz (Mark Carroto)
Saxophonist Hashem Assadullahi and his core band returned to the studio to release an exceptionally strong sophomore effort with Pieces. The Texas born-Northwest cured-New York-based musician revealed his penchant for melody on his prior release Strange Neighbor (8bells, 2009). Here he builds upon that foundation with a scattering of themes from po ...