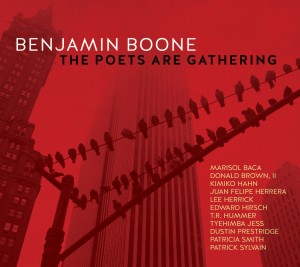 There are incantations and supplications to be found here. Also: elegies and headlines, howls and mantras, reveries and outbursts. They instruct and affirm. They urge you to dance while offering road maps to reflection. They rouse you from deep slumber and offer solace for your worst nightmares.
GENE SEYMOUR

The Poets Are Gathering is the third in a series of acclaimed recordings from saxophonist/composer Benjamin Boone that integrate the music & poems from some of America's leading jazz musicians and Poet Laureates, Guggenheim fellows and Pulitzer Prize winners. Where The Poetry of Jazz volumes offered the voice of the late U.S. Poet Laureate Philip Levine, here, notable contributors include Tyehimba Jess, Juan Felipe Herrera, Patricia Smith, T.R. Hummer, and Edward Hirsch, along with pianist Kenny Werner, guitarist Ben Monder and drummer Ari Hoenig, among many others. This recording possesses a visceral, in-the-moment force as the poetry responds to the roiling, insurgent energies against racism and other societal ills. The themes of immigration, racism, homelessness, poverty, abuse, protests, and war can overwhelm and distress, but through the voices of some of the world's great literary minds there are clues to be found to absorb the blows, summon the spirits, engage the moment and as Tyehimba Jess suggests, "murder the silence" that threatens to immobile us, to keep us away from the reasons to commit, to deal, to hope - and, above all, to imagine.

Reviews of The Poets Are Gathering

The Munro Review (Doug Munro)
LED BY BENJAMIN BOONE, THIS RUMBLE OF A ‘GATHERING' OFFERS A SEARING POETICAL TAKE ON TROUBLING TIMES People who know him probably think of Benjamin Boone, Fresno's composer-saxophonist-poetry-lover extraordinaire, as an optimistic guy. I certainly do. His visage naturally leans far toward the friendly. But when he's serious — or artisticall ...

Black Grooves (Brenda Nelson-Strauss)
Composer-saxophonist Benjamin Boone continues his fascination with poetry and jazz on his latest album, The Poets Are Gathering. The Cal State University Fresno professor, who has released two previous collections devoted to this pairing, notes that jazz and poetry have been inextricably linked since the Harlem Renaissance. Following the tradition ...

Marlbank (UK) (Stephen Graham)
Best so far in 2020… Intense and hard-hitting … socially and politically conscious, often beautiful, work that will make you think and that never shirks from challenging and confronting societal wrongs in a way that transcends the polemics of the newspaper opinion writers and the power grab of politicians… Boone's vision surpasses all expecta ...

Fresno State University Arts & Humanities (Benjamin Kirk)
"That's my son collapsed there," poet Patricia Smith bluntly speaks in the album's opening line. "My son crumpled there," a rhetorical finger points past the distracting noise of the pundits and protests to the human crux of the issue. Smith's voice sharpens the accusation as Benjamin Boone‘s saxophone unravels the emotion behind the mother's wor ...

Jazz'halo (Belgium) (Georges Tonla Briquet)
Jazz as a vector for a reflection of injustice and impotence in our current society, it still exists. Saxophonist, composer and arranger Benjamin Boone proves it in the company of a series of poets and guest musicians including Kenny Werner, Ari Hoenig, Donald Brown and Ben Monder. Unfortunately, there is no shortage of current topics. Benjamin ...

Downbeat (Hot Box) (John Murph)
3 1/2 STARS The Poets Are Gathering is Benjamin Boone's most ambitious recording yet, one where he recruits a superb arsenal of poets who unravel their works with razor-sharp conviction and clarity. The marriage of jazz and poetry can invite as much scorn as it does celebration, perhaps stemming from spoken-word recitations overpowering middling m ...

Midwest Record (Chris Spector)
Our pal Terri Hinte has a long history of knowing everything jazz and hip in the Bay area but she was too young to be any kind of first hand beneficiary of left leaning, radical and avant garde goings on in North Beach. Regardless, I can't think of anyone more appropriate to be the publicist for this radical jazz and poetry set that captures the sp ...

The Jazz Page (Editor)
NOTEABLES: Saxophonist Benjamin Boone fuses jazz with spoken words in a collection of pieces speaking to the challenges of our times. The project features the musical talents joined with some truly outstanding poets and words delivered to impacting effect. Incredible work. ...

All About Jazz (Skip Heller)
BEST OF 2020 Saxophonist Benjamin Boone's The Poets Are Gathering (Origin) was maybe the most interesting new disc this year. Ever since Ken Nordine crossed swords with Chico Hamilton sideman Fred Katz to spawn the long-loved Word Jazz albums, the two disciplines have had mutual respect but an uneasy coexistence. Boone thrives on the uneasy, and h ...

All About Jazz (Paul Rauch)
4 1/2 STARS Saxophonist Benjamin Boone continues his ambitious foray into jazz and poetry, this time recruiting an impressive cadre of poets for his aptly entitled release, The Poets are Gathering (Origin, 2020). The union of poetry and jazz has never been so powerfly presented, reflecting the past year of the worldwide Black Lives Matter movement ...

Black Grooves (Brenda Nelson-Strauss)
Composer-saxophonist Benjamin Boone continues his fascination with poetry and jazz on his latest album, The Poets Are Gathering. The Cal State University Fresno professor, who has released two previous collections devoted to this pairing, notes that jazz and poetry have been inextricably linked since the Harlem Renaissance. Following the tradition ...

JazzdaGama (Raul Da Gama)
Charlie Parker and Steve Lacy have inadvertently cast gigantic shadows on both the instruments that Benjamin Boone just happens to play. The former, an alto saxophonist is, quite simply, one of the greatest musicians that ever lived; so great, in fact, that when listening to his inventions we often forget that it was Adolphe Sax, who, in fact, gave ...

WCBN - Ann Arbor (Christa V)
This is an innovative album combining poetry and jazz together, the third of its kind that Boone has created. The two art forms have always been linked, and this is a great way to bring them back together. Essentially each song consists of a poet reading their work while jazz music plays as a backing track, turning the poetry into lyrics. All of th ...

Jazz Weekly (George W Harris)
Benjamin Boone plays alto and soprano saxes with a core team of Kenny Werner/p, Ari Hoenig/dr and Corcoran Holt/b and a rotating group of guests on instruments and vocals with poems narrated by 11 different guests. The basic theme here is a result of the frustration from COVID-19 and the George Floyd trauma, with a mix of jazz and poetry that has b ...

Cadence (Don Lerman)
Saxophonist Benjamin Boone led this large scale music and poetry project on (1) using the talents of 21 musicians and 11 poets. Each of the 16 selections presents a poem recited by its author with musical backing from groups ranging from one (solo piano) to seven pieces. Boone, the overall musical arranger, provided the compositions or musical lead ...