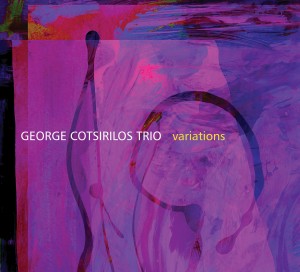 This is about as tight a jazz trio as you'll ever be lucky enough to hear.
-David Wiegand, San Francisco Chronicle

The well-seasoned trio of San Francisco Bay-area musicians continue their longstanding partnership with a third recording of creative, and swinging, new music. Guitarist George Cotsirilos, bassist Robb Fisher and drummer Ron Marabuto explore seven originals by Cotsirilos along with looks at "Doce Presnca" from Ivan Lins, the classic "But Beautiful," and an original by the bassist. "If jazz guitar had an aroma, Cotsirilos' brand would smell of Yardley Soap, single-malt scotch, and unfiltered cigarettes in close quarters: dark and slightly decadent, full-bodied, and warm." - C. Michael Bailey, All About Jazz.

Midwest Record (Chris Spector)
This is the kind of jazz guitar trio date that lifts you up so much that you almost feel guilty not writing some long screed nobody will read about how good they are. We won’t. This trio smokes! Tasty and in the pocket throughout, all we can say is you miss this at your own risk. Hot stuff. ...

Boston Post Gazette (Sal Giarratani)
San Francisco-based guitarist George Cotsirilos unites with bassist Robb Fischer and drummer Ron Marabuto to create a mainstream guitar sound that will be music to your ears. Cotsirilos's affinity for the blues comes through nicely on ten compact tracks. The roster of the varied artists he has worked with include Pharaoh Sanders, Etta James, Chuck ...

CDHotlist.com (Rick Anderson)
Guitarist George Costirilos has two big things going for him: a warm, inviting tone, and the ability to lead a trio of unbelievable tightness in such a way that it sounds loose and cheerful rather than constricted. Well, maybe one other big thing as well: phenomenal melodic inventiveness. On this album he switches between electric and acoustic guit ...

CriticalJazz.com (Brent Black)
The jazz guitar trio is risky with the end result usually feast or famine with very little middle ground. The George Cotsirilos Trio seemingly owns this format with a warmth and intimacy seldom captured since the Blue Note days of Kenny Burrell. Swing, what is it? How do you know when you are in love? You feel swing, it comes from that sweet spot j ...

Cadence (Jason Bivins)
This is quietly accomplished, mainstream guitar stuff. With solid and slightly understated rhythm work, Cotsirilos’ buoyant playing and generally sunny lyricism generally shine. After the brisk, at times dense work of the opener, the slightly lazy “I Know You Know” brims with some fine post-Wes octaves and hints at the melody for “Blame It On My Yo ...

Jazz Scan (Ric Bang)
Jazz guitarist George Cotsirilos is well known in Northern California, whether as a member of the San Francisco Nighthawks, a sideman for artists such as Pharaoh Sanders and Eddie Marshall, or an accompanist for vocalists such as Etta James and The Whispers. Cotsirilos is joined on this album by bassist Robb Fisher and drummer Ron Marabuto; togethe ...