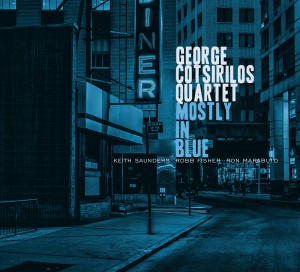 George Cotsirilos' meticulous and tasteful guitar work is marked by remarkably subtle shifts in accents, and minute changes in expression and dynamics. He displays an impeccable sense of timing especially in revealing the hidden rhythms of complex melodies. His approach to harmony is whimsical, but patently beautiful at all times.
Raul D'Gama Rose, All About Jazz

Reviews of Mostly in Blue

KZSU, 90.1, Stanford, CA (Tom McCarter)
With his perfectly round solo and chordal tone, Cotsirilos weaves a tight, swinging fabric that is fully integrated and readily digestible. Bop, beautifully performed. Sounds like it is straight out of Blue Note in the 60s, but all tracks are original, and there isn't a dull track amongst them. ...

Chico News & Review (Miles Jordan)
After three acclaimed trio albums since 2006 with bassist Robb Fisher and drummer Ron Marabuto, they hooked up with pianist Keith Saunders to explore what Cotsirilos describes as "a little different sound connected to the tunes I was writing." The results are astounding. ...

Downbeat (Howard Mandel)
4-STARS Though there are potential dangers of harmonic clash, timbral muddying and rhythmic redundancy in the contemporary guitar-meets-piano format, George Cotsirilos and Keith Saunders neatly avoid them on Mostly in Blue. Via shared sensibility and close communication, guitarist Cotsirilos leads his quartet in a mellow program deeply indebted to ...

Amazon (Dr. Debra Jan Bibel)
Chicago-rooted guitarist George Cotsirilos has blues in the bones, and although this album, Mostly in Blue, skirts the classic blues, its essence remains. And if that sounds like a legal nuance, then former University of California law professor Cotsirilos will come to the defense. Retired from his attorney and teaching duties, his first passion, m ...

KUCI - Irvine, CA (Hobart Taylor)
Electric guitarist Cotsirilos has an unique and identifiable sound. Some notes are precisely plucked and the decay is consistently even. Others slowly fade or rise and fall like balanced sine waves. While there is a great tribute to Wes Montgomery on this release, and Montgomery was known for his crispness and tonal control, Cotsirilos is doing his ...

Vintage Guitar Magazine (John Heidt)
One of today's finest jazz guitarists and composers, Cotsirilos has an unerring sense of swing and melody. His solos, while displaying accuracy and technique, are filled with soul. He's the whole works on the 45 second intro to the standard "I Wish I Knew," followed by the tune's memorable melody and fine soloing. ...

San Jose Mercury News (Andrew Gilbert)
For much of his career, George Cotsirilos harbored an uncomfortable secret. By night, the veteran jazz guitarist kept company with some of the Bay Area's most revered improvisers, swinging with quiet efficiency while delivering thoughtfully burnished solos. But he was so scrupulous about keeping his daytime activities on the down-low that many o ...

The Jazz Duck (Editor)
This is a record that probably would have escaped my notice had I not found myself doing some research on a higher-profile release on the same label, the saxophonist and academic Benjamin Boone's Poetry of Jazz tribute to his colleague, the poet Philip Levine. I ended up watching an EPK on YouTube, and, intrigued by what I heard, proceeded to some ... 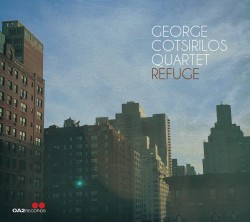