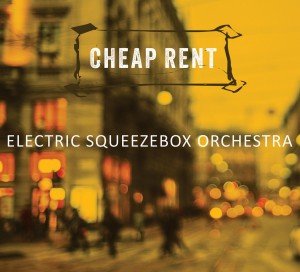 Cheap Rent marks a splendid debut...a pleasure from start to finish...
All About Jazz

San Francisco-based trumpeter Erik Jekabson has led an all-star cast of Bay Area musicians every Sunday over the last year at Doc's Lab in SF's vibrant North Beach neighborhood. Building a formidible book of creative arrangements and originals, a dynamic group aesthetic, and a loyal fan-base ready for anything, the ESO takes chances and explores options while never veering from their pursuit of groove, beauty and subtlety. From the spacious modern jazz sounds of "ESP" and the title track, to the New Orleans stomp of "Gap Toothed Grin," or the '70s groove of Herbie Hancock's "People Music," the album maintains cohesiveness while still providing plenty of surprises along the way.

Midwest Record (Chris Spector)
Damn that economy of scale. It took a Kickstarter campaign to get this record into existence. How are they going to afford to leave their confines of Frisco and go on the road when there's a jillion players in this big band and all of them are required to add their own special sauce? Listeners in North Beach don't know how good they have it that ...

Bird is the Worm (Dave Sumner)
Plenty of vibrancy to the huge sound generated by Erik Jekabson's big band, but it's the way the music flows so effortlessly that makes this a winning album. And considering how most of the ensemble consists of wind instruments, this weightless quality becomes necessarily important. The talent of the Bay Area scene is nicely represented on this s ...

All About Jazz (Jack Bowers)
Yes, the name is intriguing - but what should one expect musically from the San Francisco-based Electric Squeezebox Orchestra? Bits and pieces of a number of disparate elements, really, from straight-ahead contemporary motifs to shuffle beats and old-line swing, from down-home New Orleans rhythms to throwback grooves from the '70s and even a seduc ...

Jazz Weekly (George W. Harris)
RINGER OF THE WEEK Here's a band that avoids the pitfalls of most big band recordings. Modern stuff either sounds like a Gil Evans wanna-be or a musical version of a Jackson Pollock painting. Here, you've got a nice sized big band lead by trumpeter Erik Jekabson, and he walks the tightrope of clever sounds and harmonies as well as palpable rhythms ...

WTJU - Richmond (Dave Rogers)
This is a seventeen piece big band based in San Francisco whose members wrote seven of the ten songs on offer and created arrangements for the covers, composed by such talents as Wayne Shorter, Mel Torme and Herbie Hancock. The band features as many as five trumpet players, including Erik Jekabson, Darren Johnston, Doug Morton, Henry Hung, Dave Sc ...

San Jose Mercury News (Andrew Gilbert)
When trumpeter Erik Jekabson started a regular big-band session at the Musicians Union building in San Francisco with trombonist Jeanne Geiger a few years ago, he had no plans or ambitions about seeking out any gigs. But union president David Schoenbrun took note of the combo's adventurous spirit, and when New Orleans Klezmer All-Stars accordio ...

KUCI, Irvine, CA (Hobart Taylor)
From San Francisco, this big band is very hip and contemporary, just ahead of the beat. When you think "here are the same old moves," harmonies shift, intonation varies and yet none of the swing is lost. ...

Downbeat Magazine (Yoshi Kato)
* * * *1/2 stars! Humor and camaraderie characterize the thoroughly enjoyable debut from this communal big band with an ongoing Sunday residency at a stylish and comfortable subterranean venue in San Francisco's North Beach neighborhood. Led by trumpeter Erik Jekabson, the ESO is an impressively democratic group. On the album, 15 0f the 23 m ...

Improvijazzation Nation (Rotcod Zzaj)
Some of the most joy-filled trumpet-led jazz you've ever heard on this August 2015 release - Erik's trumpet work is astounding and lively all the way through, and the cast of characters he has with him is far too large to itemize here. On songs like the total-groove 6:40 "Bolenge Shuffle", you'll find your feet wanting to "do the jazz dance"! Eri ...