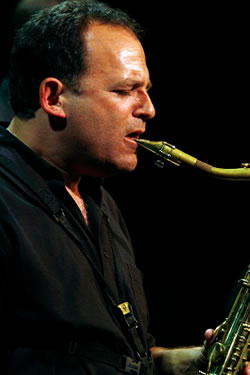 One of the best composers and players around anywhere, period!
-Dave Liebman

While in New York, Zilber recorded two critically acclaimed OWL-EMI Records as a leader, "The Heretic" and "Stranger in Brooklyn," which was named one of the top 30 CDs of all time by Jazzfusion.com. Since his move to San Francisco, Michael has performed in numerous musical settings as a leader and sideman, including co-leading a quartet featuring the renowned drummer Steve Smith and directing CARMA, the Bay Area's "all-star Jazz Orchestra." Zilber-led groups have headlined to standing ovations at The Monterey, San Francisco, Montreal, Vancouver, Victoria, Toronto, Big Sur, Edmonton, Calgary and Fairfax Festivals, as well as at such leading venues as Yoshi's, Kuumbwa, Bach Dynamite, and Slim's and recently shared the stage with the Wayne Shorter Quartet in an SFJazz night of tribute to the great saxophonist and composer.

Michael's 2000 release, the critically-hailed "Two Coasts," features Steve Smith, Rachel Z, James Genus and Rodney Holmes. This CD was a finalist for the 2001 Independent Music Awards Jazz Record of the Year. He has also been active as a sideman, including recording as a soloist on more than 20 CDs by various artists. Michael's CD, co-led with Steve Smith, entitled "Reimagined: Jazz Standards, Vol. I" and featuring Zilber's writing and arrangements, was released in March 2003, by Blue Jay Records of New York City. It received tremendous praise and went to #20 on the jazz radio charts. In September 2003, Jazzschool records made "Live at The Jazzschool: David Liebman and Michael Zilber" its debut release on the new label. Zilber's most recent tour was with Dave Liebman and Steve Smith across Canada for the summer festival circuit, and he recorded his CD, Crossroads: Brooklyn to Berkeley at The Studio in Manhattan with Liebman, Genus, Clarence Penn and Bruce Barth.

His current recordings and working groups include the upcoming Origin Records release "The Billy Collins Project. Eleven on Turning Ten, as well as CDs near completion with guitar master John Stowell and with the all-star Bay Area Jazz Collective known as Happy Hour. He is also a member of the Jazzschool Institute quartet, the first faculty group to represent the Jazzschool Institute.

Zilber is a multiple Downbeat award-winning director of the top groups at the Jazzschool Institute in Berkeley, which have been featured at the IAJE and Monterey Jazz festival. In addition, he runs the Los Medanos College jazz studies program and has a doctorate from New York University. He is an in-demand clinician and guest artist and has taught at the Stanford Jazz Workshop, Jazz Camp West and the Banff International Jazz Workshop. He also directs the Jazzschool's Summer intensive for advanced players.