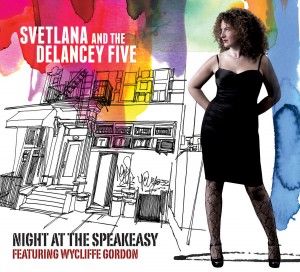 Every Monday, as she has over the past three years, the Russian-born Svetlana assembles her band of all-star musicians to play for a packed room of dancers and listeners at the Lower East Side's Back Room, an authentic New York speakeasy operating since Prohibition. Though a centerpiece of the resurgent hot jazz & swing scene, the band's diverse set list - from Ellington to Tin Pan Alley to the Beatles, the Beach Boys, and several originals - their nuanced musicianship, and Svetlana's engaging vocals, together offers the band a broad appeal beyond their most obvious audience. Produced by the Grammy-award winning Guy Eckstine with special guest, trombonist, vocalist and arranger Wycliffe Gordon, and liner notes by the Wall Street Journal's Great American songbook aficionado, Will Friedwald, Night at the Speakeasy offers an exuberant, top-flight musical experience.

Reviews of Night at the Speakeasy

Jazz Lives (Michael Steinman)
SVETLANA and the DELANCEY FIVE MAKE "SOCIAL MUSIC" I wrote about the singer Svetlana Shmulyian and her band, the Delancey Five, more than two years ago here, and I am happy to report their first full-scale CD, NIGHT AT THE SPEAKEASY, is more than pleasing. I found it an engaging session, balancing more contemporary originals and lively versions of ...

Garnet News (Jazz Tangcay)
For over 15 years, Svetlana Shmulyian has been a successful management consultant in the private sector and a lecturer at New York University and Columbia University on management research methods and statistics. She holds several degrees, including a PhD in Organizational Psychology as well as an MS in Nonprofit Management and a BS in Mathematics. ...

About Entertainment (Michael Verity)
As sophisticated as is Lisa Hilton, as sweet and subtle as is Cyrille Aimee, so is Svetlana Shmulyian sexy and swinging. A veteran of the New York nightclub scene, Svetlana calls on an A-list roster of players to make this record, including drummer (and co-producer) Rob Garcia, trumpeter Charlie Caracas and bassist George Delancey. Also in the mix ...

Blogcritics.org (Jack Goodstein)
If Night at the Speakeasy, the title of the debut album of Svetlana & The Delancey Five, raises visions of the music of a time long gone, there is truth in advertising. Russian-born vocalist Svetlana Shmulyian fronts an ensemble of jazz pros in a hot jazz and swing program of songs old and new, originals, and covers. Hot jazz, as Will Friedwald exp ...

Midwest Review (Chris Spector)
Guy Eckstine might not be able to put his feet up on the desk at 825 8th anymore but he still has all the verve his daddy left on his DNA in tact. Surrounding a New York treat that convenes on Monday nights with a crew of players that would be household names if there was still a real record business investing jazz, this genre twisting trip to the ...

Musical Memoirs Blog (Dee Dee McNeil)
If you love the music from the 1930's, this CD is the perfect choice. From the very first cut, ("All I Want"), composed by vocalist Svetlana Shmulyian, you are transported to a time of ‘Flapper' dresses, tight fitting skullcaps and cups full of Moonshine. The arrangements set the mood for the musicians to perfectly interpret. An Ellington and Str ...

Classicalite Magazine (Mike Greenblatt)
Downtown in New York City and right behind Ratner's Deli on Delancey Street is one of two remaining Manhattan speakeasies still operating from the days of prohibition, The Back Room, on Norfolk Street. It is said that gangsters Meyer Lansky [1902-1983] and Charles "Lucky" Luciano [1897-1962] used to hang out there. Its house band for the past t ...

O's Place Jazz (Dr. Oscar Groomes)
Svetlana Shmulyian is a vocalist and songwriter who is ushering the traditional Dixie/New Orleans Jazz of the early 1900s into what is now is now called Hot Jazz. Her sweet soft vocals are prominent on top of the music from her swinging ensemble the Delancey Five including all-star guitarist Vinny Raniolo and bassist George Delancey. Special guest ...

All About Jazz (C. Michael Bailey)
The name Svetlana and the Delancey Five sounds like a Cold War cadre of marauding spies. Moscow-native Svetlana Shmulyian is the real article and brings a certain "other-worldness" to a jazz repertoire existing somewhere between 1920 and the Rapture. The band's Night at the Speakeasy is their debut for the West Coast OA2 Record label. With that ...

Michael's Music Log (Michael Doherty)
Svetlana And The Delancey Five are an excellent jazz band based in New York City, playing regularly at a venue called The Back Room. That venue is located just off of Delancey Street, thus the band's name. The band's new CD, Night At The Speakeasy, also gets its name from this venue, as The Back Room has been operating since the days of Prohibition ...

Jazz Weekly (George W. Harris)
It's bands, and albums, like these that kindle your first love for jazz. Vocalist Svetlana Shmulyian swings and sings with a team of Adrian Cunningham/woodwinds, Charlie Caranicas/tp, Dalton Ridenhour/p, Vinny Raniolo/g, George Delancey/b, Rob Garcia/dr and guest Wycliffe Gordon/tb for a snappy set of standards and originals. Shmuylian's got a ...

Cadence (Jerome Wilson)
Svetlana Shmulyian is a singer with the kind of sweet, lilting voice ideal for the sort of sunny Thirties-style jazz she performs and the Delancey Five combo is also very adept at this style. The songs they play are a combination of period pieces and modern works, including several written by Shmulyian which mix in more advanced elements of strutti ...

NEW YORK MUSIC DAILY (Delarue)
Among New York swing jazz bandleaders, singer Svetlana Shmulyian either has the best taste in supporting musicians, or has finagled her way to the best access to them. Maybe both. She distinguishes herself as an original songwriter, and she sings in character, bringing new life to old standards as well as her own dynamic, poignant originals. He ...

Vintage Swing Review (Jonny T.)
"Night At The Speakeasy" is the superbly produced debut album from Svetlana And The Delancey Five, a masterful assortment of intelligently crafted tracks, augmented by renowned New Orleans composer and trombonist Wycliffe Gordon. The pairing is divine, creating a swinging compilation that manages to pay homage to the bygone performances of hidden s ...

Lucid Culture (Staff)
Since swing jazz is dance music, most swing bands have limitations on how far out on limb they can go. After all, you've got to keep everybody on their feet, right? Svetlana & the Delancey Five are the rare swing band who don't recognize any limits: they're just as fun to sit and listen to as they are for the dancers. There weren't a lot of peop ...

LEARN MORE ABOUT
Svetlana and the Delancey Five