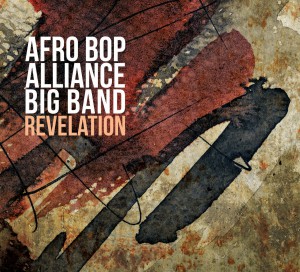 Formed as a septet, Drummer Joe McCarthy's Latin Grammy Award-winning Afro Bop Alliance expanded to a big band for two of its five previous releases. For their sixth, McCarthy adds further to the palette, blending stellar rhythmic creations and powerful, resonant horn voicings with steel pan virtuoso Victor Provost's pan quartet on two of his original compositions. Along with other music by Roland Vazquez, Vince Norman/Joe McCarthy, and Luis Hernandez, "Revelation" explores the unique combination of big band and steel pan as one, in a diverse recording that takes large ensemble writing and performance to a new level.

Jazz Profiles (Steven Cerra)
Everytime I think I've heard it all in terms of Latin Jazz in Big Band configurations along comes something new and different to dazzle and surprise me. Such was the case with the latest from Grammy-award winning drummer Joe McCarthy and saxophonist Vince Norman who co-lead the Afro Bop Alliance. Their forthcoming CD is entitled Revelation and it w ...

AXS (Carol Banks Weber)
Drummer Joe McCarthy brought out the big guns for the Afro Bop Alliance's next album, Revelation. There's nothing like an Afro-Cuban big band. Throw in four excellent steel pan players, including the return of Victor Provost (2014's Angel Eyes) in the lead, and you've got yourself another winning jazz showcase of larger-than-life performances and s ...

All About Jazz (Jack Bowers)
Revelation is the sixth recording by drummer Joe McCarthy's sixteen-year-old Afro Bop Alliance (the last three by the big band after three by smaller incarnations), the first that has come this way for review. As McCarthy's stalwart ensemble is based in the Washington, D.C. area, the supposition is that a number of topnotch armed services musicia ...

Drumhead Magazine (Editor)
On Revelation, we hear Grammy Award winning drummer/leader Joe McCarthy and colleagues reaching still higher levels of technical excellence and compositional adventure. From start to finish on Revelation is the Clave in all its elasticity and permutation, animated by a rhythm section of consummate clarity and finesse. McCarthy's lithe interplay wi ...

Latin Jazz Network (Raul da Gama)
The relatively small, yet deeply rewarding output of the Afro Bop Alliance Big Band is skillfully wrought, thoroughly idiomatic, inventive and communicative on every level and it is not surprising that each album finds favour with audiences and students of big band music. Moreover the music's variety of mood, conception and sheer exuberance is a mo ...

Sea of Tranquility (Jon Neudorf)
Revelation is the sixth album for Afro Bop Alliance Big band. Three of those records were major big band affairs including their latest. This massive band is led by Joe McCarthy who provides drums and percussion. There are no less than seven trumpeters, seven trombonists, seven sax players and four steel pan virtuosos. This is a difficult album ...

Downbeat (Brian Zimmerman)
Editor's Pick There's a grand precedent for Afro-Cuban big band jazz. If the genre had a Hall of Fame, it would be stocked with vivacious, exuberant figures: Machito's Afro-Cubans, Dizzy Gillespie's Big Band, Tito Puente. As Afro-Cuban big bands of today aim to extend this genre's great legacy, their success depends largely on how these ensembles ...